Do sceptics rush in where angels fear to tread? 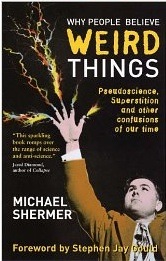 I'm currently reading the new edition of Michael Shermer's Why People Believe Weird Things which is an excellent book debunking pseudoscience and superstition, from the man who is probably our best known media sceptic.

However, at one point, Shermer does trip over his own assertions. (I point this out in the same spirit as that of Bill Bryson, using examples of bad English that he found in guides to English usage in his own guide.)

Shermer is careful to first explain the difference between the scientific method and the way most pseudoscience is reported. (He doesn't mention it, but I love Robert Park's encapsulation of this in Voodoo Science as 'data is not the plural of anecdote'.)

Shermer tells us that in science we should be scrupulous about presenting data that goes against our theories, rather than being selective with the observations. But then, only pages later, he indulges in a little selectivity himself. To illustrate the recent growth of science and technology, he tells us that transportation speed has undergone geometric growth. His list goes from stagecoach (1784) 10 miles per hour, through bicycle (1870) 17 mph, steam train (1880) 100 mph, airplane (1934) 400 mph, rocket (1960) 4000 mph, space shuttle (1985) 18000 mph to TAU deep space probe (2000) 225,000 mph. (I've skipped some entries, but this gives a feel for the sequence.)

There's more than one bit of naughtiness with the data here, I fear. The last entry isn't human transport, so really can't be counted as being from the same data set - you might as well put the speed of a bullet in there. If you drop that last entry we have a graph that flatlines 22 years ago.

But, more worryingly, there is also a discontinuity in the data. Up to airplane, they are all modes of transport available to normal people. From rocket onwards, they are specialist devices not available to the rest of us. If you keep the more consistent comparison of generally available transport, the graph is much more interesting. It goes a lot higher than 'airplane', because in the 1970s we got Concorde taking us to Mach 2 (over 1500 mph). But that was the last upward step. And since Concorde was withdrawn, the transport speed graph drops to less than half its previous value. It is currently in the high 500s. So that geometric progression isn't anywhere near so solid as Shermer's figures suggest. Say after me, Michael - 'We should be scrupulous about presenting data that goes against our theories'.

I don't point this out to knock Shermer, or the book, which is very good, just to point out the difficulties that come hand in hand with being a sceptic. (Or should I say skeptic, as the book uses US spelling. I just love reading the word 'skeptic' because to UK eyes it looks so seventeenth century, a bit like spelling optics or physics as opticks and physicks - I'm sure the reverse is true when US readers see some of our spellings.)