The ride is rough with Lovelock 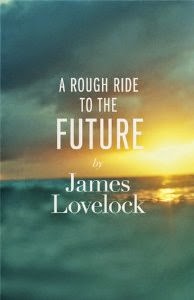 A couple of days ago, I mentioned James Lovelock's antipathy to peer review in his new book. The review of the book is now live on www.popularscience.co.uk and because I think it is a book worthy of wide exposure, I am reproducing that review here.

James Lovelock is unique, both as a scientist and as a writer. He may be most famous for his Gaia hypothesis that the Earth acts as if it were a self-regulating living entity, but has done so much more in a 94 year life to date.

Rough Ride (not to be confused with Jon Turney’s Rough Guide to the Future) is an important book, but it is also flawed, and I wanted to get those flaws out of the way, as I’ve awarded it four stars for the significance of its content, rather than its well-written nature. It is, frankly, distinctly irritating to read – meandering, highly repetitive and rather too full of admiration for Lovelock’s achievements. But I am not giving the book a top rating as a ‘well done for being so old’ award – far from it. Instead it’s because Lovelock has some very powerful things to say about climate change. I’ve been labelled a green heretic in the past, and there is no doubt that Lovelock deserves this accolade far more, as he tears into the naivety of much green thinking and green politics.

He begins, though, by taking on the scientific establishment, pointing out the limitations of modern, peer reviewed, team-oriented science  in the way that it blocks the individual and creative scientific thinker – the kind of person who has come up with most of our good scientific ideas and inventions over the centuries. He does this primarily to establish that he is worth listening to, rather than being some lone voice spouting nonsense. I’m not sure he needs to do this – I think there are few who wouldn’t respect Lovelock and give him an ear, but it’s a good point and significant that he feels it necessary.

The main thrust of the book is to suggest that our politicians (almost universally ignorant of science) are taking the wrong approach to climate change. He derides the effort to develop renewable energy, despises the way the Blair government chickened out of nuclear power (and is very heavy on the Germans and Italians for their panic reaction after the Japanese tsunami) and makes it clear that from his viewpoint, our whole approach to climate change is idiotic.

With the starting point that the whole system is far too complex to allow any decent modelling, or to be sure what any attempts at geoengineering could achieve, Lovelock suggests that the answer is to let Gaia get on with sorting itself out, and instead of worrying about trying to manage carbon emissions in our current situation, we should instead put our efforts into adapting the way we live to cope with changes in the climate. He points out, the kind of climate we had before the industrial revolution (or accelerated evolution, as he believes it to be) was not the typical climate of the Earth either, which would be more like its state in the grips of an Ice Age.

Rather that trying to somehow get it back to an imaginary utopian state, he argues we should be looking at new ways to live that will enable us to manage despite what the climate throws at us. He points out, for instance, that in our fears of the impact of 2 to 6 degrees of warming we miss that Singapore manages perfectly well in an environment that is 12.5 degrees above the global average. Of course, you might argue that we couldn’t sustain that way of life for 7 billion people – and Lovelock is sanguine about this. He doesn’t expect humans to carry on at that kind of population level, as part of the adaptation.

What’s fascinating is that while reading the book I also read an article by that most demonised of environmental figures, Bjorn Lomborg, and it was remarkable how much similarity there was in their views of the approach we should take, though coming at the problem from very different directions and with very different predicted outcomes.

A final thrust of the book is perhaps less convincing. Lovelock, looking 100 million years or more into the future, suggests that the best way our descendants can survive to keep Gaia going is in electronic form, as it would be possible to live on for many more millions of years despite the Earth warming, due to the Sun’s gradual increase of output, to a stage where it is uninhabitable by biological life. At the same time he dismisses terraforming Mars (and doesn’t even consider starships) as a mechanism for keeping a future humanity alive. This seems a bit of an stance and dilutes, rather than helps the central message of what we should do about climate change and human existence on Earth.

As I mentioned earlier on, you may well find the book a frustrating read because of all the repetition, but this is a book that will really get you thinking about our approach to climate change, and whether we’ve got it all terribly wrong. Read it.