How I rattled PETA's cage

To be honest I have always felt that the animal rights campaigning organisation PETA is a little flaky (in part, I suspect because it is a very American organisation, so culturally takes a very different approach to us Brits). But a recent campaign by them has really dropped them to the lowest of the low in my estimation.

PETA has been pushing the idea that there is a link between autism and dairy products, using the poster illustrated above. This is a classic example of making an incorrect deduction from very limited trials which certainly don't show what is being claimed, and is particularly appalling after the parallel 'autism and MMR' disaster caused by the Wakefield fiasco.

I was able to find very quickly two surveys of the research, one from Cochrane and one from the NHS/University of York that concluded that the evidence does not support the suggestion. I retweeted the tweet that originally alerted me to this, only to have PETA respond with a classic 'anecdote as data' response. This really isn't good enough. 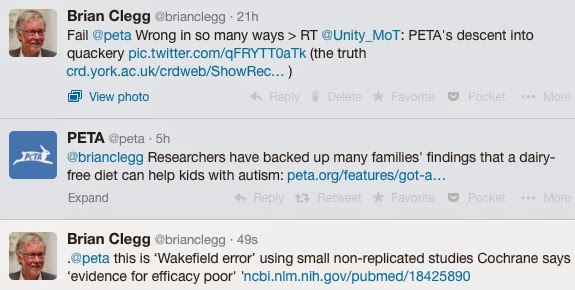 You might as well argue (to deliberately pick an argument that PETA probably wouldn't run a campaign on) that wearing fur coats is good for your health, as if you ask people wearing them on a cold day if they feel better than people in a short-sleeved T-shirt, they will say yes*. This campaign is about as helpful.

* In case anyone thinks I am advocating the wearing of fur coats, I am not. Please read the words.
autism Bad Science fail poor judgement scandal