Get started on your book! 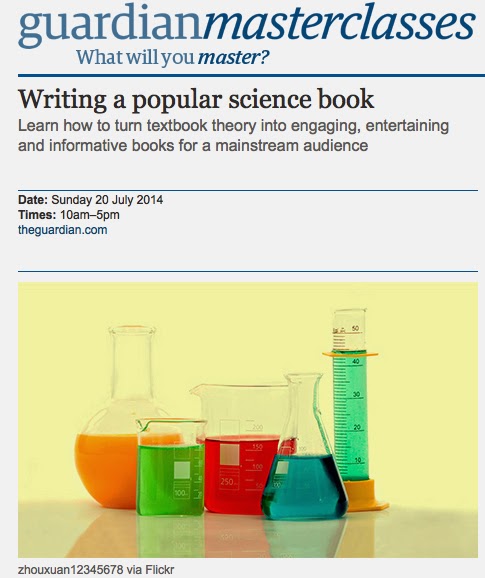 I'd like to draw your attention to the 'Writing a popular science book' Masterclass organised by the Guardian on 20 July in London.

Whether you are a scientist who would like to get wider public interest in your field, or just someone who has always wanted to write a book, this is a great opportunity to gain the necessary know-how on everything from choosing topics to selling your idea and the publishing process.

With talks from scientist and communicator Professor Stephen Curry, TV presenter and author Angela Saini, former science book publisher and author Simon Flynn, award winning science writer Brian Clegg and former biologist and author M G Harris, plus the opportunity to pitch your book ideas to an expert panel for instant feedback, it should be a brilliant day.

To ensure a place, tickets need to be booked by 7 July - you can find all the details on the Guardian website.

Here's a little more about the team:

Brian Clegg is a popular science writer with 20 books in print who has written for publications from the Observer to Playboy. After degrees in Natural Sciences and Operational Research, he worked at British Airways before leaving to set up a company giving training in business creativity. These days, most of his time is taken up writing popular science books and giving talks. He is a Fellow of the Royal Society of Arts. Find out more on Brian's website.

Angela Saini is a British science journalist and author, whose first book Geek Nation: How Indian Science is Taking Over the World was published in 2011. Angela has also been published in Science, Wired, the Guardian and New Scientist and is a frequent presenter on BBC radio, for shows including Material World and More or Less. In 2008, she carried out an investigation into bogus universities which was broadcast on the BBC TV's flagship Ten O'Clock News.

Simon Flynn has degrees in chemistry and philosophy and worked for a good number of years in publishing, becoming managing director of leading UK independent publisher Icon Books. He recently left the publishing world to become a science teacher.

MG Harris is the author of the popular Joshua Files series of novels. Born in Mexico and brought up in Manchester, she studied biochemistry at St Catherine's College, Oxford University, before pursuing a doctorate at St Cross College, Oxford. MG spent several years working in research laboratories before setting up her own internet company. She is a successful young adult fiction author and will bring to the panel a mix of expertise in biology and in the narrative style so important for good popular science. In an attempt to cover up the fact that at heart she's a bit of a geek, MG spends as much time as possible going out to salsa clubs to dance.

Stephen Curry is a Professor of Structural Biology at Imperial College. His main research interests are in structural analysis — using X-ray crystallography— of the molecular basis of replication RNA viruses such as foot-and-mouth disease virus and noroviruses (which include the infamous 'winter vomiting bug'). Since 2008 Curry has written regularly about his research and the scientific life past and present on his Reciprocal Space blog and at the Guardian, Curry is also a founder member and vice-chair of Science is Vital, a UK group that campaigns on scientific issues, and is on the board of directors of the Campaign for Science and Engineering.