Fiction benefits from holding back 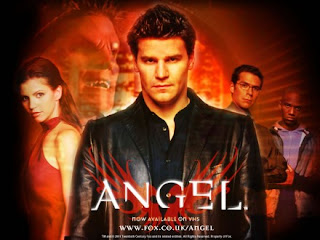 As a non-fiction author it's always with some trepidation that I offer advice to fiction writers, but I can't help passing on a lesson I observed the other day.

I was watching the Joss Whedon show Angel on DVD with my daughter - she was too young to watch it first time around - and couldn't help be awed by some clever work in the writing.

For those not familiar with Angel, the running big bad through all five seasons was a law firm called Wolfram and Hart. Sounds a convincing name for a law firm. But at the end of the second season - two years into the show - we learn that the company had its origins in three mystical creatures, the wolf, the ram and the hart.

Now if Whedon had chosen to reveal this in the first few weeks, it would have been of passing interest. 'Yes, that's clever,' we might have thought... and moved on. But because we had been given time for the name Wolfram and Hart to become part of the fabric of Angel reality, the revelation was much more impressive. It really shocked.

Assuming this was planned, rather than accidentally noticing the way the name could be broken down, the delayed reveal was masterly. (As it happens, it is done in a rather throw-away manner, possibly because they were worried about the show being dropped, but that's a different issue.)

In writing a book, you aren't going to be able to wait two years for a shock reveal - but this does emphasize the importance of planting some seeds, making sure the 'seed' version of the idea really gets set in our minds and only then, much later, revealing the twist as a great writing technique. The more time and reinforcement you can give to the 'normal' interpretation, the better the reveal will be.
fiction techniques writing