February 01, 2010
Sometimes people can be tripped up in understanding the world by a basic bit of science. Yet if we can overcome that misunderstanding, suddenly an awful lot becomes clearer. One good example of this is the basic operation of forces acting on a simple ball you throw in the air. Take a moment to get answers to these three questions before reading on (ignore air resistance, as pointed out below): 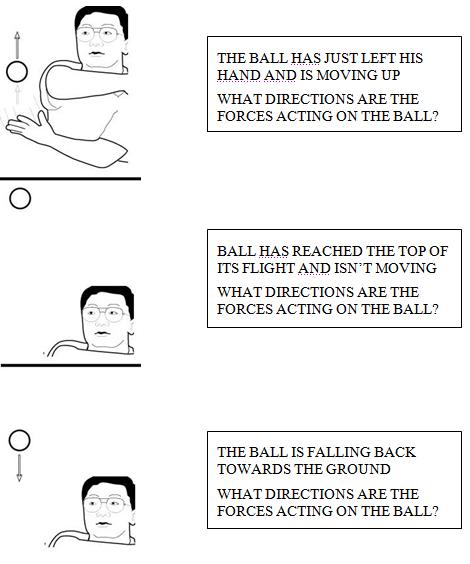 Don't read on until you've mentally answered each question.
No cheating - get those answers straight in your mind.
When this little test was given to secondary school science teachers in the UK, the majority got it wrong (so don't worry if you did). If that sounds bad, bear in mind most UK science teachers aren't physicists.

The answers? In each case, exactly the same. Just one force, downwards. The force due to gravity. Once the ball has left the thower's hand it has nothing acting on it but gravity. The acceleration is always downwards.
Apart from being a useful little exercise in understanding of physics, I think there's a wider implication on taking a scientific viewpoint here. It's always useful, whether you are assessing the value of a homeopathic remedy, the dangers of WiFi radiation or the flight of a ball to ask 'Just what is acting? How is it having an effect? What will the result be?' There's a lot of knowledge about the world that can quite simply be gained if we take this approach more often, rather than leaping in with assumptions and 'what everybody knows.'
forces gravity physics public understanding of science science