Why a French restaurant chain makes me burst out in song 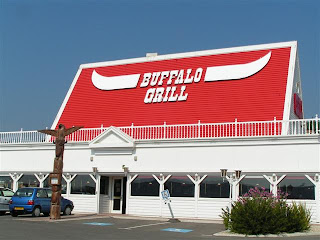 There are certain rituals of life that seem to be unavoidable. Often these are family traditions. The family of a friend of ours, for instance, had a habit of making a silly noise every time they drove into a different county.

I find that there are certain encounters that generate a near-automatic response. Whenever I see a particular thing it make me utter a (not very funny) phrase, or burst into song.

Do you have similar automatic responses? What triggers your funny bone? And for your delectation here's one version of the original of this masterpiece with non other than Bing Crosby and Rosemary Clooney. What more could you ask?