Before I was famous 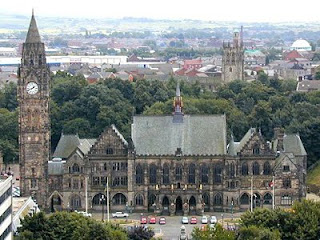 When you listen to the people turning up for auditions for the X-Factor, many of them are attending with the intention of becoming famous. It's an end it itself. They crave fame. I can tell you here and now that being an author is, for the vast majority, anything but a route to fame. For every J. K. Rowling there are thousands of us published authors who don't really appear on the radar. So any wannabe famous authors, get in that X-Factor queue.

This reality made it doubly pleasing to discover (thanks, Wendy, for pointing it out) that according to this website I am, apparently, one of the 20 most famous people to be born in my home town of Rochdale. The town is probably best known for being the place the modern format of Co-operative movement started (or these days, where the TV show Waterloo Road is set).

The list includes a fair smattering of actors, mostly bit part players on Coronation Street or Emmerdale (Rochdale is handily situated between the two), though we can claim the old stalwart Jack Howarth, who played Albert Tatlock many years ago. We've also general TV represented by Sky presenter Ginny Buckley and one-time comedy actor and now birder Bill Oddie.

Politics is represented by the 19th century trade reformer, John Bright, and 20th century MP Cyril Smith, while music gets a fair look in. Apart from Liz and Andy Kershaw and Lisa Stansfield, we have, of course, the early to mid twentieth century superstar, Gracie Fields. With my aversion to sport, I'm delighted that the only sportsperson we can claim is John Virgo - if you are going to have sport, snooker is about as ironic as it gets.

And saving the best for last, the real surprise for me was that actress Anna Friel was on the list. Shooting to fame with a lesbian kiss on the soap Brookside, she was stunning in the Stephen Poliakoff TV play, The Tribe. Most recently she has been a fascinating presence in the US show Pushing Daisies. Although its ambition exceeded its reach, this was a truly original programme (despite Ms Friel's rather so-so American accent).

So I want to thank the organizers of this list for including me. After all this is surely the closest I will ever come to Anna Friel.