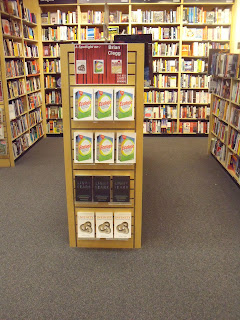 For obvious reasons I'm interested in books, and the future of books. As I mentioned recently I've reviewed ebook readers for Good Housekeeping, which involved a considerable amount of trying out different readers. So I am, I think, able to make a sensible comparison between the experience of reading in the traditional and new formats.

For what it's worth, I currently far prefer the traditional version. It's not the 'smell and touch' argument. I really don't care what a book smells like. Actually, that's not true. I'd rather my books didn't smell at all. But the heft of a book in the hand is much more practical than an ebook reader, I prefer having two pages available at a time. I like being able to be careless with it. Turning pages is frankly a bit of a faff on the electronic version. And the page is rarely as well laid out, or as readable as the printed version.

However, I do use an ebook reader, specifically Stanza on the iPhone. If I'm stuck somewhere with nothing to do, I'll read something on my phone, and very much enjoy doing so. In most circumstances, the real book triumphs, but when there isn't access to a book, the convenience of being able to call down a book across the air waves is supreme. It's horses for courses.

That's my position, but what does Britain in general think? Well, the Telegraph recently told us, and though it's a subject I'm interested in, and their survey supports my personal view, I'm highly suspicious of the results. We are told a survey was taken of 'over 1,000 consumers aged between 16 and 60.' (Phew, I'm still young enough that my opinion counts.) And of those consumers 'a whopping ninety-five per cent of respondents still prefer physical books over e-books.'

Can we take that statistic at face value? Not without considerably more context, information that wasn't given in the article. Specifically, how many of these consumers have ever used an ebook? I don't mean pressed a few buttons on one in Waterstones, how many have tried to read a book on one? To say that 95% 'prefer' physical books implies that they have the ability to make the comparison - but I suspect a fair percentage didn't. Imagine this had been a survey about food and turned out that most people who said they prefered tofu to meat had never tasted tofu. It would be considered very silly.

I'm not saying the result was wrong (though the numbers probably were). The chances are, even if they were all given the chance to try ebooks, the majority would prefer physical books as I do. But, as so often happens, this is a case of the media using statistics in a way that doesn't reflect what the numbers actually say.
books ebooks news numbers statistics