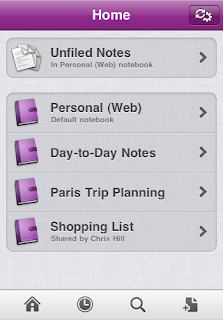 Yesterday should have been a really exciting day. I've been pestering Microsoft's PR people for ages about when the iPhone version of their notebook software OneNote would be available in the UK. It has taken then around 6 months to convert from US to UK English (I know it's difficult guys, but you've had enough practice) and now it is available, and currently free.

So I zapped OneNote on my iPhone, and it should have been like Christmas, only it wasn't.

I'm a very heavy user of OneNote on the PC. I have a dual screen setup and most of the time I've got what I'm working on filling one screen and OneNote filling the other. OneNote is my work repository. If I see a scrap of information that could come in useful for a book I'm writing, I slam it into OneNote. I keep the books themselves there too, and all the articles I write, and checklists and goodness knows what. The thought of having it accessible on my iPhone filled me with delight. But it hasn't worked out. For two reasons. One is the way I work, the other the way OneNote works. 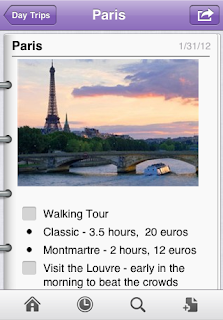 The thing is I've got vast quantities of stuff in there. Including plenty of full length manuscripts as Word documents and goodness knows what. It's my filing system. And it just won't translate into the mobile OneNote. It's really for a totally different purpose.

So if I'm going to use OneNote for iPhone, I really need to split off from the morass the useful bits of information that I might need anywhere any time. They're in there, but mingled with all that stuff that wouldn't work on the phone. Now I could put this stuff into a separate folder and just share that. But if I do, here's the sad, thing, OneNote isn't the best way to do it.

If I did separate that stuff off, it would work much better in Evernote, which I'm already using for notes on my iPhone and iPad. Why? Well:
I haven't given up. It is too early to be certain and I have no intention of writing off OneNote for iPhone at this stage. But the experience could have been so much better. Maybe it's my fault. Perhaps I used OneNote the 'wrong' way. But the honeymoon has not gone well.

P.S. I'm not planning a Paris trip - these are Microsoft's sample screens