July 01, 2011
As I've mentioned before, I like receiving letters and emails from readers. Sometimes they are a little strange, but often they are just pleasant thank-yous. And then there are the quibbles.

I received from my publisher the other day what they referred to as a piece of fan mail. But it wasn't what I'd call fan mail. It was a quibble. These happen when you get something small wrong. And of course this always happens somewhere in a book. It happens most often when I write something 'obvious' from memory, or commit an elementary slip where my fingers are busy without my brain being engaged. (I once said an alpha particle was a hydrogen nucleus, instead of a helium nucleus. It is a big mistake in a sense, but it was a small slip in terms of not watching those fingers.) 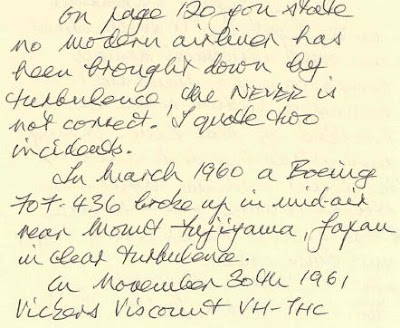 Sometimes you want to say 'Get a life,' but  just occasionally you can get one up on the quibbler. In this case, an ex airline employee was taking umbrage with something I'd said about turbulence in Inflight Science. In an effort to reduce nervousness when turbulence hits I pointed out that no modern airliner has been brought down by turbulence. Ah-hah, said my correspondent, 'the NEVER is not correct.' And he went on to list two incidents where an airliner has been brought down - a Boeing 707 in 1960 and a Vickers Viscount in 1961.

Now I had chosen that word 'modern' with care. I did know about one of the incidents he mentions, and I think there has been a more recent one featuring an antiquated Russian jet. But that was the whole point. I didn't expect anyone to think of planes designed in the 1940s as modern. I would hardly refer to a car or computer that had a problem in 1960 as modern. Of course the picture isn't quite so clearcut with planes. After all, the Boeing 747 is still widely used and that dates back to the 1960s. But even so, the 707 and the Viscount are a generation earlier.

In the end, I can sort of understand why people write letters like this - it's the same reason as why I shout 'You're wrong!' at QI. But it probably isn't really worth it.