What do a South American butterfly and motorhead TV presenter Richard Hammond have in common? Both have a need to avoid close contact with water. In his 2012 BBC programme Richard Hammond’s Miracles of Nature, Hammond demonstrates an all too common problem: dropping a phone down the toilet.

Apparently 19 per cent of us admit to having had this accident occur at some point. It’s all too easy, particularly if you have a phone in a breast pocket and bend over – or simply slip while holding your handset in the smallest room. We won’t resort to Hammond’s dodgy statistics: he combines the 40 per cent who admit to taking their phones into the loo in the first place (what do the other 60 per cent do with their phones, leave them by the door?) with that 19 per cent to suggest half of those who take their phones drop them down the pan. However, there is no doubt that the toilet and all the other water hazards we face from puddles to simply using our phones in the rain put those most essential of personal gadgets at risk. 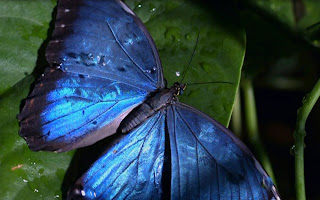 Rather in the same way that I recently took a look at the lotus leaf effect in my series Nature’s Nanotech, Hammond was inspired by the magnificent electric blue wings of the morpho butterfly. Living in the rainforest, this large-winged butterfly is in constant danger of inundation, bombarded by large water droplets in a way that could cause its fragile wings permanent damage.

To avoid every truly coming into contact with water, the butterfly’s wing surfaces are covered in a series of sharp-edged ridges, making a repeated waffle-like pattern. When a drop of water hits the wing, only a tiny part of the droplet – less than one per cent of the surface – ever comes into contact with the wing. There is no wetting effect – the droplet just rolls off, leaving the wing undamaged. And this is exactly what Hammond wants to see happen to his phone. 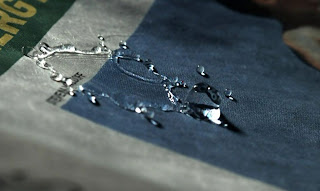 To see just what’s possible, Hammond takes a trip to the Oxfordshire laboratories of our friends at P2i, where a nanopolymer coating produces a very similar hydrophobic water repulsion effect to the butterfly’s wings. To show just how much this approach could do for us, Hammond’s team knock up a Heath Robinson machine where water repellency ensures that things we normally can’t afford to get wet continue to function in simulated rainfall. We see:


With surely conscious echoes of the film The Man the White Suit, Hammond finally dons a coated white suit which takes everything that can be thrown at it: beans, coffee, red wine, mustard, fruit juices and soy sauce. 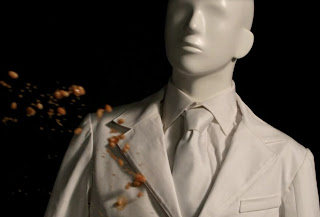 In that film, inventor Sidney Stratton, played by a young Alec Guinness, produces a new fabric that will never get dirty or wear out. Interestingly, clothing manufacturers hate the idea and take increasingly desperate measures to try to destroy Guinness’s pristine white suit. It’s rather surprising in some ways (but encouraging) that modern manufacturers of phones and sportswear take a rather different attitude and embrace the concept. There is one huge difference, though. In the end, the treatment causes Guinness’s fabric to break down, coming apart in pieces, where the surface coating used here has no impact on the substances in covers from fibres to electronic components on the inside of a phone.

This takes us back to the phone down the toilet – with a quick treatment at P2i, Hammond’s phone not only survives the submersion but rings underwater (rather him than me when it comes to holding it to his ear – and Richard, take off the bracelets next time, they will get soggy).

In the classic ‘light entertainment science’ mode that Hammond pioneered with the Sky series Brainiac, the programme rather firmly makes the point. This is something we really want for our phones. They are far too precious to be damaged by water – and the whole point of having a mobile is that you should be able to use it safely wherever you are.

I think Hammond missed an important point he made, which is that this is a concept with even more potential than the essential role of keeping phones safe. I know the coating is also used on trainers and some military clothing, but I would have thought there are a fair number of much broader applications, just as the Heath Robinson machine suggested, that go beyond the current imaginings of the marketers of this technology.

For the moment, though, our phones remain the main target for this technology. We shouldn’t think this is only a problem in the bathroom – there are plenty of other opportunities for water damage to phones that could be averted with well-applied water resistance. It’s time for that butterfly to stretch its wings.

Images - As seen on BBC 1's Miracles of Nature