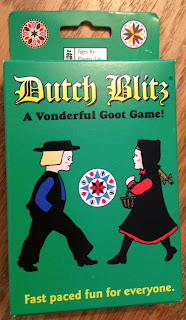 At Christmas, my niece bought us a card game. Now I love my niece dearly, and she usually has exquisite taste, but this time I thought she had blown it. We aren't great game players, and I thought this was going to be something that was quietly put away and ignored. And such would be the case if we hadn't thankfully been forced to play the game with my brother and sister in law (who also received one). And it was brilliant. I can honestly say I haven't enjoyed a game as much for years. It's quick, fun and simple.

The game is called Dutch Blitz. Apparently it's not easy to get in the UK, but well worth tracking down. In essence it is a bit like each player is undertaking a shared game of patience/solitaire. That sounds deadly dull - but the competitive aspect makes it fast, furious and wonderful.

Unfortunately the printed rules are quite hard to take in - the actual game play is a lot simpler than the sheet seems to suggest. We were lucky as we got the simplified explanation and didn't have to work it out ourselves. But I can assure you that it is well worth fighting past those instructions to play.

You can play with two to four players (more if you get extension packs) - I think it's best with four, where  you get more pressure than two, as you are trying to follow what everyone is doing simultaneously.

It is really hard to describe how enjoyable it is. An indication is what happened on New Year's Eve. We tend to see in the New Year, then go to bed pretty soon after. But we had been playing Dutch Blitz up to 11.30 and decided we just had to go back to it... and were still playing at 3am.

So even if you don't really like games I would encourage you to track down Dutch Blitz. It's brilliant. If you fancy it, it is available in the UK on Amazon, but you can get it at half the price (don't ask why) from this motor parts shop. You can also find out more on the official site - including seeing the rules... but remember actually playing it is much simpler than the way they describe it!