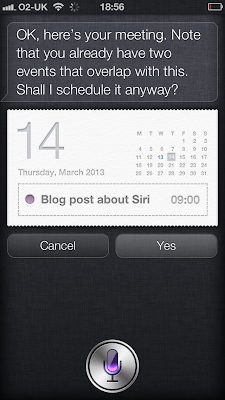 When I first got an iPhone that supported the Siri voice-controlled assistant, I thought it was a bit of a gimmick. I did the usual stuff of asking it 'What is the answer to the ultimate question of life, the universe and everything?' and other silly questions. And then for a long time I didn't touch it. Which was a shame, because I have discovered it is really useful.

The thing is that I often think of something I need to do or remember while I'm out walking. It's one of the reasons I like walking the dog or going to the post office - I get my best ideas in the process. The natural thing to do is to stick something in my diary, or make a note... but it's a bit slow and fiddly on the move, especially if you've only one hand free. With Siri it's a piece of cake. In fact for quite a lot of entries, like the one I made to demonstrate the feature for this blog post, it's quicker to use Siri than it is to do it by hand, even if you are sitting at your desk.

What I said to Siri was 'Schedule tomorrow 9am blog post about Siri.' It came back with the response you see in the photo, offering me the meeting and pointing out I already had something in my diary at that time. All I had to do was press or say 'Yes' and the item was in my diary.

Of course like any voice recognition there are some words it will struggle with. But it's not bad at all, and for this kind of thing it really is very impressive. You can also do things like call someone or text them, find out where you are, get a route to a location and all sorts of other things, just by talking. I was truly sceptical, but with a little practice I wouldn't be without it.