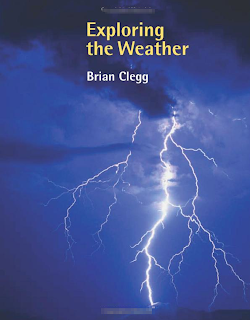 Generally speaking, a book either exists or it doesn't. But I am in the strange state of having a book that exists in a shadowy world that is neither real nor imaginary. Just as Aristotle considered infinity to be a potential state that both existed and didn't exist, it seems I have a potential book with my name on it. It's almost a quantum book, in a state of superposition.

It's called Exploring the Weather and it was a follow-up to my illustrated book Exploring the Universe. So far, so straightforward. You can see the cover here (and, yes, the title font is too small) - and if you take a look on Amazon.co.uk they claim to have some copies in stock. But here's the thing. Two weeks before the book came out, the publisher, Vivays,  went into liquidation. I have received a single advanced copy, but nothing else. I believe that the first print run was produced, but have no idea who has it, what will happen to it, what will happen to the rights and when and if I will get paid was I was owed for it.

Meanwhile it continues as a ghost book, haunting the likes of Amazon. I haven't even put it on my website. I suppose I should, for completeness sake, but it seems a bit like advertising a train wreck. What the administrator will do is a mystery, though they appear to be attempting to sell Vivays as a going concern, but the suspicion is that an author will come pretty low down the pecking order when it comes to getting anything out of the wreckage.

I'm not even sure what I'd like. The money the owe me? - obviously, especially if someone else takes over. A stack of books? - better than nothing, I suppose, if the whole thing goes belly up permanently.

It is, as someone once said, a bit of a pickle.