The naming of names 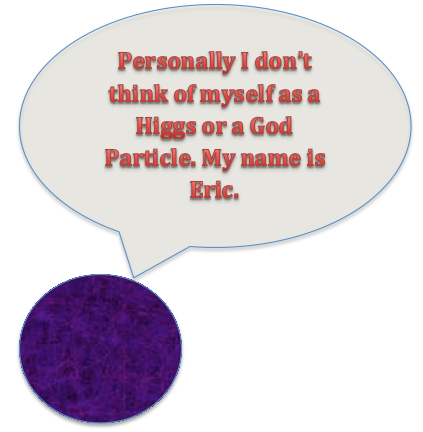 I gather from the BBC that Peter Higgs gets rather irritated when the Higgs boson gets referred to as the God particle. Leaving aside those who get miffed that Higgs himself gets the sole glory of the name, I think this is very short-sighted.

Dr Higgs' objections are twofold: a) that he is an atheist and b) 'I know that that name was a kind of joke. And not a very good one I think.' To be honest, I think it might better if we had more God particles and less of the kind of names scientists tend to come up with left to their own devices.

Let's get those objections out of the way first. So what if he is an atheist? Does that make the word 'god' disappear? Irrelevant. (And 'god' is used illustratively by plenty of atheists and near-atheists - Einstein and Steven Hawking to name but two.) As for the second, well yes, it was a sort of joke. But what's the problem with that? A touch of taking-self-too-seriously perhaps? According to Leon Lederman, the Nobel Prize winning physicist behind the name when he wrote a book with that title, he really wanted to call it the 'goddamn' particle, but the publishers wouldn't let him. (To be fair, the publishers were probably correct. 'The God Particle' is attention-grabbing. I have a book called The God Effect, a direct reference to this name, and having the G word in the title of a book does no harm to it.) For that matter 'big bang' was a sort of a joke too, but though there were a few moans early on, it has generally been comfortably accepted.

The fact is, there are three kinds of scientific names. Probably the best are the simple ones that are catchy and get the point across. Think electron, positron and photon, for instance. These are the ideal, but they are few and far between. Then there are the occasional jokey but memorable ones. God particle and big bang apart, we have, for instance, those interesting proteins like sonic hedgehog, pokemon, seahorse seashell party, dickkopf, R2D2, Homer Simpson, glass bottomed boat and, my favourite, abstinence by mutual consent.

Unfortunately we also have lots of dross. Either words with no real mental handles that require rote learning and don't really put anything across (think boson, fermion, lepton etc.) or even worse convoluted terms that if anything mislead. Gauge theory would be a good example - it sounds like it's about measurement, but actually it is, of course, (to quote Wikipedia): a type of field theory in which the Lagrangian is invariant under a continuous group of local transformations. That makes it nice and obvious, doesn't it children?

I think when scientists moan about populist names some are in suffering from a problem that goes back to medieval times. I am very fond of the thirteenth century proto-scientist Roger Bacon and he was a great believer in communicating science. He had to be, bearing in mind the book proposal he first wrote was 600,000 words long. However he didn't believe knowledge should be shared with common oiks like you and me. He was very much of the 'pearls before swine/cabbages before goats' theory. Knowledge was only for the cognoscenti, and I think some scientists actually resent anything escaping from their ivory tower world.

The other reason some dislike these names is the feeling that they trivialize - but that misunderstands the whole point of making something memorable. Which is more likely to stick - big bang or gauge theory? Black hole or eigenvector? If you want to communicate, you have to think about the words you use, and all too often the words that are enshrined in science are a mess.