May 24, 2013
PCs and I go back a long way. My second PC at work, for instance, was IBM's AT model, of which I was privileged to have the second one that IBM imported into the UK (at least that's what they told me - they probably said that to all their customers). And it was a huge improvement on my previous XT, doubling the hard disk* space at a stroke to 20 Mb.

I tell you this, not so you can snigger at granddad, but to emphasise how things have moved on. In the early 1990s there was a huge business in software that automatically compressed files on your hard disk so you didn't run out of space. It slowed the computer down, but the introduction of music and photos was jamming up disk space terribly. But then something changed. Disks got really big. For my last few computers I've had more disk space that I knew what to do with. Let's take a look at what my computer has on offer and what I've used: 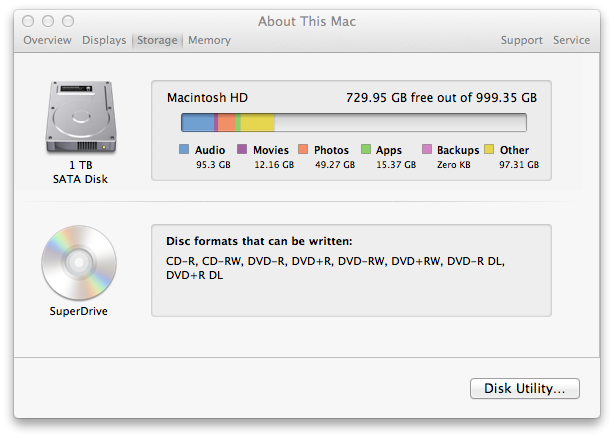 ... and that is keeping every email I send, every important one I receive, everything I've written since I started writing, lots of scanned documents, music, photos etc. etc. I've still got 73% free.

The same thing is now happening online. I recently mentioned cloud backup services like Dropbox, Skydrive and Google Drive. But things are even more extreme with photo storage thanks to a breathtaking move from Yahoo. Where, for instance, Google's Google+/Picasa gives you a respectable 5 Gb free, Yahoo's Flickr has now started offering 1 Tb. A terabyte. 1,000,000,000,000 bytes (actually more than this as a Kb is really 1,024 bytes because computer scientists can't count, but let's not be fussy). That's as much space as my entire hard disk. Stunning or what? 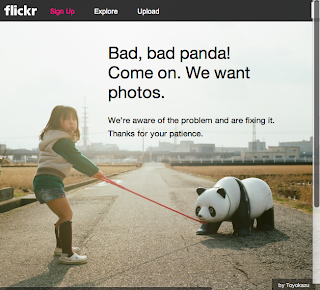 (At least, that's the theory. I suspect Flickr has been overwhelmed by people signing up, because when I just went to get a screenshot of my pathetic 100 Mb of photos in 1 Tb of space the image to the right is what came up.)

It has left me rather confused. I really don't know what to do now. I could now have all my photos for all my life available online, sharable how I like. It would take a long time to get them up there, but it would probably be worth it. Will I do it? I don't know. But I'm tempted. How about you?

*If anyone wants to point out to me as a British person I should spell this 'disc', the convention is in computing to use the likes of 'disk' and 'program' instead of the UK equivalent.