June 19, 2013
A while ago I reviewed a book of UFO photos, commenting that I had severe doubts about the images, partly because a fair number of them were very similar to the fakes I used to do in my youth (just for fun).

I commented 'One of the problems with the hubcap technique is that it tended to fly, and so to be photographed, at an unnatural angle – yet time after time these “unexplained and inexplicable” shots in the book are of fuzzy, out of focus hubcap-like objects at the same kind of angle as I found so irritating when I tried to fake my pictures.' 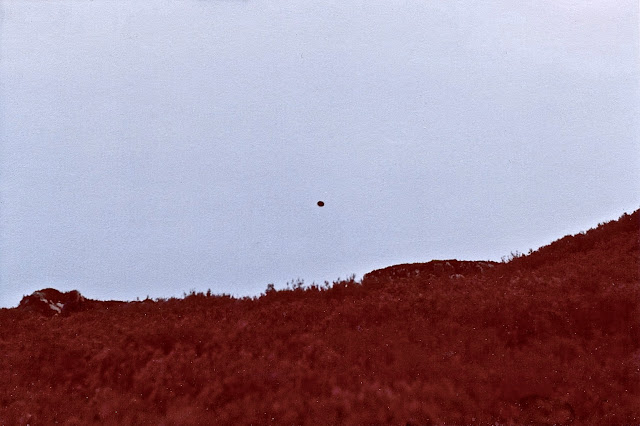 I am gradually scanning in my old photos and have just found a couple of these hubcap style photos (this was actually a metal camping plate). They were taken over Aviemore in Scotland in a very high wind that meant if you threw the plate against the wind it would hover extremely impressively. 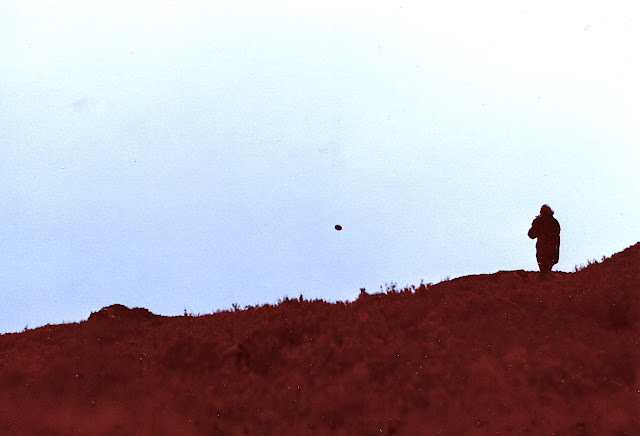 This is clearly a real saucer because it is hovering in the same position in two separate photos, just at a slightly different angle. This was intentionally done, using the mound the person is standing on in the second image as a reference point. Note also that it was clearly there a long time, as the first shot is in early dawn light and the second much later. (Actually they were minutes apart, that's a bit of cheeky post-processing.)

Here is the traditional much-too-blown-up shot from the image above. If this was in a UFO book we would be asked to note the clear pyramid-shaped lighter coloured propulsion unit beneath, the suggestion of a superstructure above the saucer, and the way the drive field is distorting the air around it.

No, it is just a tin plate, throw frisby-style into the wind.