Why we're in the financial mess we are 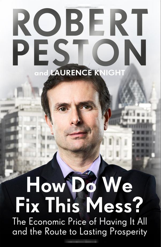 One nice side effect of my encounter with the BBC's Robert Peston the other day was that he kindly gave me a copy of his latest book, How Do We Fix This Mess - and I am very grateful that he did.

Like, I suspect a lot of people, I have struggled to understand just how the banks got into the mess they did, what is happening to try to untangle it, what is going on in the Eurozone and more. And thanks to this book I now have a much better feel for what it's all about. It's the sort of thing that is very difficult to put across on the TV news, requiring a more detailed, sprawling approach possible in a book, and Peston really does make things a whole lot clearer. He also makes it clear that there hasn't been enough done to prevent this happening again - the regulatory system still encourages the bankers to dream up byzantine mechanisms to get around the rules and increase their bonuses.

What's more as a bonus (the acceptable face of the bonus) there's an explanation of the whole LIBOR scandal business - and an in-depth analysis of China's finances and why there is a lot of potential for problems there too. Of course, you have to have an interest in current affairs/business and finance to find this as fascinating as I did, but it is important reading if you want to get on top of this crucial world situation affecting all our livelihoods.

One thing Robert Peston is famous for is his rather strange, drawling intonation (oddly this was less obvious when we were discussing quantum physics) and the book does have an equivalent in a habit of far too often saying 'In other words' or 'Put simply this means' or something similar. Time and again he will make a statement and then re-state it in simple terms. (He actually does this twice in a single paragraph at one point.) Usually the restatement is valuable, and sometimes having both versions helps because one uses the terminology you often hear but don't understand and the other clarifies - but it does happen far too often. I also ought to mention Laurence Knight who appears in very small letters on the front - he presumably co-wrote the book, so part of the acknowledgement for an excellent bit of work should go to him.

If you were baffled by the credit crunch, banking behaviour, the Eurozone crisis or any combination thereof and want to know more, this is definitely the book for you. You can see it at Amazon.co.uk.
Using these links earns us commission at no cost to you