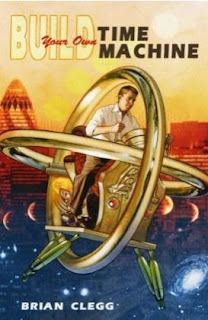 I love giving talks about the science of time travel as a result of Build Your Own Time Machine - and I can't help but feel there will be a few more as we lead up to the 50th anniversary of Doctor Who in November. I usually start by pointing out that there is nothing in the laws of physics that prevents time travel. In fact it's happening all the time. The best manmade examples? Voyager 1 has travelled 1.1 seconds into the future, while the GPS satellites constantly slip into the past. Often people don't believe me - and they have a good, if invalid, reason for this disbelief.

The thing is, when a time machine moves into the future or the past it disappears, doesn't it? The Tardis does, and so did H. G. Wells' time machine. But Voyager and the GPS satellites stubbornly insist on still being there. This is because it's something fiction gets wrong. Most time machines don't disappear as they travel through time. Let's take a look at those two examples, but exaggerate the effect to see what's going on.

We'll start with the simpler one, travelling into the future. Anything that moves has a time stream that slows down compared with the place it is moving with respect to. So when, for instance Voyager 1 flies away from the Earth, its time runs slower. This is a well tested and inevitable effect of special relativity. So let's imagine that Voyager 1 travels much closer to the speed of light than it actually does. And now we use a magic telescope that allows us to see from the Earth into Voyager 1, so we can watch its clock. We would see the clock running incredibly slowly. When a year has passed by on the Earth, perhaps just a second has ticked past on the clock. So after 10 years, just 10 seconds has passed by on the probe. If Voyager 1 arrived back at the Earth at this point, it would have moved 10 years into Earth's future.

Now here's the thing. For that whole 10 years we still see Voyager 1 - we just see its clock ticking past very slowly indeed. It doesn't disappear, we continue to see it. But hang on, you might say, this is cheating. Voyager isn't really moving into the future, it just looks like that because its clock seems to be running slowly. But this isn't a 'seems to be' (as it is sometimes described even in popular science books). From the Earth's viewpoint that clock really is running slowly. As is everything else on board. If Voyager was much bigger and had a crew then the people on the ship will only have aged 10 seconds and experienced 10 seconds passing by. They really have travelled into the future.

(If you are wondering why time only slows on the ship, you are a clever person. Special relativity works both ways. From the ship's viewpoint, the Earth is moving away at high speed, and to anyone on Voyager, time on the Earth seems to run slowly. But the situation isn't symmetrical. The ship undergoes acceleration at both ends of its trip that the Earth doesn't, and it is this acceleration that means the ship experiences something different to the Earth.)

So to the more unlikely aspect of time travel. Because heading off to the future doesn't risk any strange paradoxes, but should you travel into the past, surely all those funny things like killing your parents before you are born can happen? Let's take a look at the GPS satellite.

The satellite is moving, so seen from the Earth, just like Voyager 1, the satellite's time runs a bit slower because of special relativity. But there is a second effect here which operates in the opposite direction and is more significant. General relativity shows us that gravity slows time down. The stronger the gravitational field, the slower time runs. So time runs faster on the GPS satellite than it does on the Earth. The opposite effect to Voyager 1, so the satellite moves into the future. Again, let's imagine the (tiny) effect is hugely exaggerated and every second that passes on Earth, a year passes on the satellite. So after 10 seconds passes on the Earth, the satellite is pretty well 10 years ahead. Once more, if we watch the satellite travel through time, we don't see it disappear. We just see its clocks run really quickly.

So let's finish the time voyage. On the satellite, say, it is 2023, while it is 2013 on the Earth. So the satellite pops down to Earth and moves ten years into the past. Whizzo magico. Only here's the thing - it can't move back before it was first set up, because time doesn't go backwards on the Earth, it just runs very slowly from the satellite's viewpoint. So it can't go back into the past (or peer down at Earth and discover next week's lottery results) or do something that will effect the future, because the Earth's future hasn't happened yet. The future it has moved from is its own. Like Voyager, it might seem that this cheating, but it really isn't. For instance, if people lived on that GPS satellite, in the 10 seconds that elapsed on Earth, they could do 10 years of work and bring back with them newly written novels etc., bringing them from the future to the past. They just couldn't get up to any tricksy paradoxes.

If you find this all rather disappointing, there is a third class of time machine where you would disappear, and where paradoxes are possible. These are the ones depending on wormholes, neutron star cylinders and the like which won't be around for millions of years and may never be possible to construct. But you shouldn't be disappointed by what is possible now, because we still have the amazing fact that both backward and forward travelling time machines exist today.