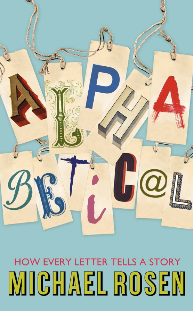 A few days ago I heard the author Michael Rosen talking on the radio about his new book Alphabetical. He told how the capital letter A turned upside down looked like a stylised ox's head with two horns - and low and behold, this letter used to be called aleph, the word in ancient Semitic languages for an ox. I was hooked and was soon plunging into this exploration of the English alphabet.

Along the way Rosen brings in so many stories. A lot of this is done by a cunning wheeze in the structure. The book is arranged alphabetically (how else?) and each letter starts with a short section on the letter itself, its origins and its uses in English, then follows with a longer section that has a theme. So, for instance, D is for disappeared letters and V is for Vikings. We then get a meandering exploration of that theme - sometimes with many deviations along the way, but always tying back to the alphabet and writing.

It ought to work brilliantly, and in many ways it does, but I was slightly put off by the chunkiness of the book - over 400 pages - and combined with the alphabetic approach, it is difficult not to occasionally have that sense of 'I must plough on to the end' rather than 'I'm enjoying it'. It's that same sense I might get when someone has kindly bought me, say, an encyclopaedia of science fiction and I feel I must my work my way through it from end to end. On the whole it does work, but I couldn't help but feel it might have been better if Rosen had let go of the rather obvious strictures of the alphabet for the book's structure. I think there's an interesting comparison with a couple of books I reviewed once about the periodic table. The one that worked best wove the subject matter into a series of stories with no particular table-related structure. This worked so much better than if the author had worked sequentially through.

However, there is lots to enjoy, from Rosen's impassioned rant against the obsessive use of the systematic synthetic phonics approach in teaching reading these days, to his really interesting observations on the importance of Pitman's shorthand and even his affection for the A to Z (or his knowledge of the absence of the London E19 district). It's a bit like being trapped in a lift with Stephen Fry when he's playing QI host. This is the QI of letters and words.

If you are interested in writing and words - or struggling for a present idea for someone who is - this could be an ideal buy. See more at Amazon.co.uk and Amazon.com
Using these links earns us commission at no cost to you