Coming over all thermodynamic 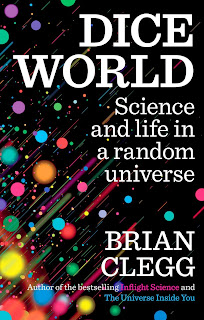 My book Dice World about randomness and probability and their impact on our lives inevitably includes quantum theory, but some have expressed surprise that it also covers the second law of thermodynamics. After all, popular science books are supposed to be about modern, trendy, weird science, aren't they? And that sounds so old and Victorian. I mean, 'thermodynamics'. It just reeks of steam engines. And that's certainly why it was first of interest - but the second law is just as fascinating as anything that the twentieth or twenty-first centuries have thrown at us, and this is the first of a short series of posts pondering it.

The second law is a classic of physics, so much so that it inspired the physicist Arthur Eddington's famous lines:


If someone points out to you that your pet theory of the universe is in disagreement with Maxwell's equations - then so much the worse for Maxwell's equations. If it is found to be contradicted by observation - well these experimentalists do bungle things sometimes. But if your theory is found to be against the second law of thermodynamics I can give you no hope; there is nothing for it but to collapse in the deepest humiliation.

The more common way of looking at the second law in modern times is in terms of entropy, a measure of the disorder in a system, but I want to start with the original, steam engine driven approach. This says approximately that in a closed system, heat will move from a hotter part of the system to a cooler part. If it didn't, we could have lots  of fun. We could build a perpetual motion machine. All you would need is to get that heat flowing the wrong way, make use of it to power the machine, then send it back to be used again. Simples. We can also think of it as saying that in a closed system disorder stays the same or increases; it does not decrease.

But the universe seems to have a downer on perpetual motion machines, and doesn't allow the second law to be broken. Except when it does. Because one of the reasons that the second law is so fascinating is that, though it is such a fundamental aspect of the workings of reality there are ways that it can be broken - or bent. The true flaw in the law I'll come back to another time, but let's explore the classic bending beloved of creationists. Because it's easy to read the law as 'heat flows from hot places to cold' or that 'disorder stays the same or increases.' Yet this is patently not always true.

Take a refrigerator. That starts with something that is cold and makes it colder still. It takes heat from a relatively cold place (inside the fridge) and sends it somewhere warmer (outside). Surely Eddington should be turning in his grave. Or there's the argument of our creationist friends. They say that the second law proves the existence of God. Why? Because disorder has clearly decreased on the Earth. You might not think this is the case when you listen to the news, but here we are talking about the order and disorder in stuff. In the early years of the Earth's formation everything was pretty random. But over time molecules have been organised into all kinds of complex systems. There is much more order in the world than there used to be. And that, say the creationists, is evidence of God's hand at work.

The reason for this apparent discrepancy is that we aren't allowed to cherry pick with science. We can't just take a bit of a scientific theory that we like and ignore the rest. And that's exactly what is being done here. In both the fridge and the disorder on Earth examples we are ignoring the words 'in a closed system.'

Scientists like closed systems. They are imaginary boxes in which something takes place that are isolated from everything outside. They make things simple for the scientists - but they are often not very realistic. Think of my specific examples. The second law only works in a closed system because otherwise energy can come in from outside and drive things the opposite way. And that's exactly what happens here. The refrigerator isn't a closed system - we have to pump power into it to get the cooling to happen. Similarly, the Earth gets vast amounts of energy from the Sun - plenty to deal with its ability to create order from disorder.

So the second law is bent - but only if you read it wrong.

I want to leave you with one disconcerting thought, though. There are no closed systems, with the possible exception of the universe (and we don't know that for sure). None whatsoever. For example, you can't stop gravity. There is no box to prevent it influencing a system. Of course you can counter it various ways, notably through acceleration, but that isn't the same thing as saying that you are isolated from it. Closed systems are useful approximations to the real world, a tool that physicists rely on to make understanding ridiculously complex things amenable. But they aren't real. It's easy to think of scientists as being very precise people - and they are. They love their error bars. But that precision comes at a price, and it's one that sometimes catches everyone out.

More on the second law another time, where we will see how it can be broken entirely - and the role of a demon in exploring it.