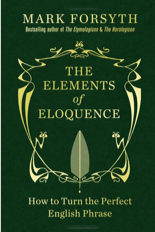 I very much enjoyed Mark Forsyth's fluffy but inspiring earlier books on words, notably The Etymologicon, and his new title The Elements of Eloquence is equally enjoyable (and anything but a hard read). But it is also a book that makes you stop in your tracks. Because this stuff really matters.

Forsyth has revealed a startling truth that should have been obvious - in all those hours spent in English lessons we aren't taught how to write well. Yet there is a way to do this that has been around since the time of the ancient Greeks and that was, until it went out of fashion, a major part of the school curriculum - rhetoric.

Now, if you told me a couple of weeks ago that I would wax lyrical about a book on rhetoric, I would not have believed you. 'Rhetoric' just sounds really dull. As a subject, it sounds as if it would make politics look engaging. Yet, as Forsyth so ably demonstrates, rhetoric is simply the key tools and techniques of getting something across in words in a way that will catch the attention and engage the reader. Although originally aimed primarily at speeches, these techniques are equally important for the written word.

A couple of hundred years ago children were taught rhetoric - now we have to pick it up by osmosis as our English teachers rabbit on about 'what the author was feeling when she wrote this' or 'what the author really means.' How much more valuable to teach us 'what techniques and tricks the author is using to reel the reader in.'

Admittedly the whole field could do with a bit of a work over. If their science was anything to go by, I can't believe the ancient Greeks had the last word on rhetoric - there are probably key tools and techniques they weren't aware of. And the current terminology is horrendous. Forsyth points out that experts can't agree on what the rhetorical terms mean - but even if they could, many of them are obscure Greek words that are almost impossible to remember. If we were to teach rhetoric again, I'm sure we could come up with more memorable terms than aposiopesis, polysyndeton and epizeuxis (to name but three). But the fact remains that rhetoric is a treasury that most modern writers have never consciously explored - and our writing life would be much richer if they had. It's a brilliant conceit to do this, Mr Forsyth.

Is the book perfect? No. I find Forsyth's writing style a little too jovial and jokey, while some of the approaches he uses (cramming paragraphs full of the rhetorical technique covered by that chapter, and ending each chapter with an example of the next technique, for instance) are irritatingly clever-clever. For me, some of his examples of hendiadys just don't make sense (though to be fair, he says you can never really be sure this technique has been used.) But I can forgive anything for a book that has educated me more about the use of English than several years in English classes at school.

if writing were building construction, grammar and vocabulary would give us the raw materials and the basic skills to assemble them, but rhetoric provides the abilities of the architect. To write without an awareness of these tools and techniques is like expecting a bricklayer to create a cathedral. Anyone with the faintest interest in writing, or the English language, should be rushing out and buy this book.

You can see more at Amazon.co.uk and Amazon.com.