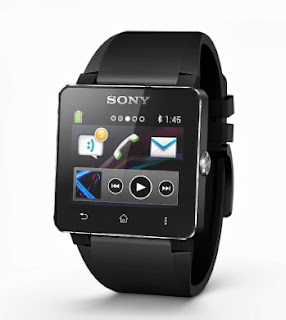 O yippee-do-dah, Sony has brought out another smartwatch. And further surprises, Samsung's smart watch sales are pitiful. Still my beating heart, and pass the smelling salts. (Whatever happened to smelling salts?)

In case you haven't come across them, a smartwatch is the wrist-worn equivalent of a smartphone, though the screen is, of course, much smaller. I can see why people get excited about smartwatches. They are truly reminiscent of all that 1950s scifi. Once you've got a videophone on your wrist, all you need is a flying car and a laser gun and you are truly equipped for the twenty-first century. But the reality is rather different.

Firstly, all the evidence is that wearing watches is going out of fashion. Remaking them as a smartwatch seems a bit like the way the gas companies responded to the introduction of the electric light by bringing out a better gas jet. They were already dead, but they didn't realize it. I'm not saying watches will disappear. There are still plenty of old fogies like me who love them, and they will always have a niche appeal. But lots of people in my daughters' generation simply don't wear watches.

Then there's the matter of functionality. It's amazing what you can get in a watch-sized bit of electronics, but it is not going to be the equivalent of a phone. Firstly, at a time when phone screens are getting bigger and bigger, you are talking about taking the screen down to a tiny fraction of the size. But also it would be an immense challenge to get all the gubbins of a smartphone into that form factor.

So in reality, smartwatches are actually dumbwatches. Rather than have the functionality themselves, they pretty well universally tie into a smartphone using Bluetooth. So you have to carry the phone anyway. And that being the case, what would you rather do using that tiny screen on your wrist? After all, bear in mind that as much as 90% of smartphone use has nothing to do with making calls. I can't see myself typing a text on a smartwatch screen, or consulting a map, or looking up something on Google, or watching a Youtube video, or updating Facebook. It is inevitably going to be very limited by scale. You are left with a very expensive remote control for a device that really isn't hard to handle.

Will this stop manufacturers churning them out? Not for a while. Because anyone who hasn't got one will still be tempted by that Dick Tracy appeal, and the gadget lovers amongst us will lash out for one. But after that... would they buy a second smartwatch once the novelty has worn off? I think not.