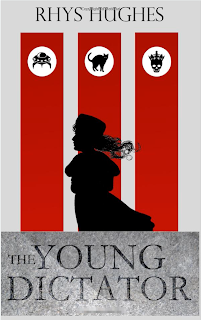 There's a certain kind of novel that is technically aimed at 'young adults' (bookseller speak for teenagers), but that is also enjoyed by adults. It is, of course, a publisher's dream if it comes off, as you end up with a much bigger potential audience than usual. The best known example is, of course, the Harry Potter series, though I think my favourite crossover YA books are The Owl Service,  The Night Circus and Miss Peregrine's Home for Peculiar Children, - in fact, demonstrating the power of this approach, they remain among my favourite books ever. I was, therefore, rather interested when I came across a new such book called The Young Dictator by Rhys Hughes.

The premise is intriguing. Jenny Kahn, a twelve-year-old girl, by strange means, wins a by-election and becomes a member of parliament. With some magical assistance, she ends up as dictator of the UK, which is just the starting point on a career of dictatorship that will involve aliens, giant spiders, a visit to Hell and more. Promising indeed.

The reality is mixed. On the good side, the imagination is unparalleled and often unrestrained, creating some bizarre and wonderful imagery. Although the main character is a touch two dimensional, there is a marvellous character in the form of Gran, an alchemist who claims to have been around in the time of the dinosaurs and is both totally evil and often hilarious. I love a scene early on when Gran is trying to conceal that she is knitting Jenny a rosette so she can stand as an MP. Asked what she is knitting, Gran replies 'An idol.' When questioned further she claims it is a false god to worship upstairs at a shrine she has constructed dedicated to old pagan beliefs. When it is pointed out that she lives in a bungalow, she responds 'Exactly!'

On the downside, the ideas are rather let down by a writing style that is virtually non-existent. We are just told what happens, plonkingly, without any feel for atmosphere or characterisation (apart from Gran). It was rather like reading a book written by a teenager. I was also uncomfortable about the casual lack of morality of practically all the main characters, especially Jenny. She has occasional slight twinges of conscience, but is quite happy for pretty well all the main supporting characters to be massacred in unpleasant fashions, often at her orders. Someone she goes out of her way to rescue, for example, is then crucified. There's also a rather tasteless idea that as a dictator she can join an online service called Fascbook, where she chat to various online friends including Adolf, Benito, Pol Pot and Idi Amin. While I am against any form of censorship, I do wonder if using people who caused such suffering as a comic turn is ideal in a book for teenagers.

I am left, then, in a bit of a quandary. There was certainly much to enjoy in the book, and I happily read on to see what the next exotic idea and weird happening would be, as you may well do too - and Rhys Hughes did not disappoint - but it would have been so much better with a lot of polishing and a big dollop of writing style.

Find out more at Amazon.co.uk and Amazon.com
Using these links earns us commission at no cost to you