The difficulty of setting a novel in a different country 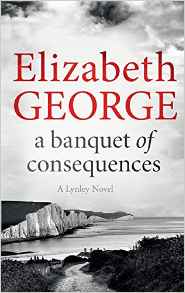 I've just finished Elizabeth George's latest Inspector Lynley novel, A Banquet of Consequences. As always, I enjoyed it (though I really wish she could keep the length down - this one weighed in at over 650 pages). But, as always, a rather evil part of the entertainment was spotting where this American writer fails to get her English setting right.

I, certainly, would never be brave enough to try this. I've had enough experience with US versions of popular science books ('What is a skirting board?' 'A coconut shy?') to realise it's almost impossible to get everything right. I'm certainly not objecting to George doing it, but as a consequence, I do think she's fair game for spotting where things just don't quite work. According to the acknowledgements, she always employs locals to ensure she gets things right, but if this is the case they are being overly nice to her, because a handful of errors always slip through - and there were several cases in this one.

I'm not going to pick out them all - there comes a point where overloading with examples becomes breaking a butterfly on the wheel - but there are two that illustrate perfectly the dangers of this approach. One is in speech idioms. One of George's recurring main characters is a circa thirty-year-old female police sergeant. She always uses very strange euphemisms when questioning suspects (I just can't see a police officer asking a subject about their sex life by asking them if they've been indulging in 'dip the banger'), but the thing that really is hilarious is the way she frequently refers to women as 'birds', as if she was in some kind of The Sweeney time warp.

The other example is more subtle and involves a practical day-to-day difference between the US and the UK. Someone is buying an item in a shop and signs the credit card receipt. I can't remember when I last saw this happen - signing for a credit card payment went out with chip and PIN a good 20 years ago. But because US banking has always been bizarrely slow to move to new technology - how long were US customers having to print of cheques for monthly bills while we had direct debits? - it's no surprise that a US author doesn't spot how incongruous this is.

I really don't understand how her British checkers miss these things. But it illustrates well the difficulties of setting a novel in a different country.
books novels research setting writing