On Being Mistaken for a God 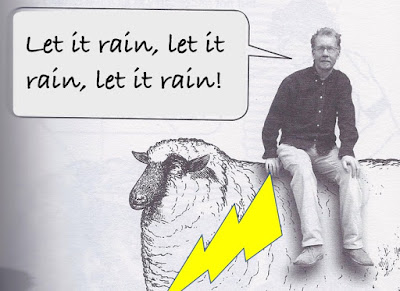 I was just accused of being a rain god, and it feels rather odd. A complete stranger came up to me in the street and said 'It's going to rain, and it's your fault.' I know some male deities are portrayed as being bearded and of a certain age, but it was still quite a leap to make.

The approach taken is sadly typical of the youth of today (my accuser was a young woman) - they have no idea of cultural niceties. There was no attempt to propitiate me, along the lines of 'If I buy you a pint of beer, would you mind not making it rain.' No, I was just told out-and-out that it was my fault that it was about to rain. No worship, just god-blaming.

On the whole I didn't mind being mistaken for a god, but if it happens again I would ask for a little more respect. And that pint.

In the interest of completeness there is an alternative hypothesis available. I was cutting my hedge at the time, and she may have decided that I was tempting fate by doing so when there was the possibility of rain from the thick grey clouds in the sky. But Occam's Razor suggest that my being a god was the simpler of the two explanations and so, for scientific reasons, I am sticking to it.