On making an unexpected visit to Lille 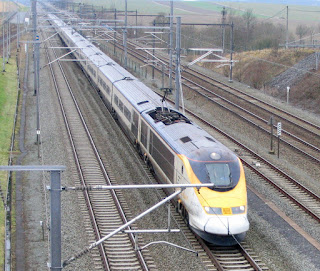 I was recently in Lille, and the most entertaining thing there was watching a pair of rats fight each other.

While that statement's true, it's rather unfair to Lille. I am biassed, as I had no intention to be in Lille (other than passing through). To be precise, I was on the Eurostar train from Brussels to London. Things didn't start brilliantly, but at Lille they went spectacularly wrong.

We had left Brussels about an hour late, allegedly because an electrical problem meant that the check-in went down for a few minutes. (It wasn't clear why this fault, which happened when most of the travellers had already checked-in, should stop everyone boarding, but that's how it went.) But we were soon in Lille, where we were joined by a bunch of people from Disneyland Paris (so quite a lot of young travellers) and expected to be whisked off at 200 mph any time soon. Only, we weren't.

We sat in the train for some time, before the inhabitants of coaches 10 to 18 were asked to get off the train, taking all their luggage with them. This was apparently because there was a 'trespasser' on the train. As might be imagined, it took quite a while for nearly 700 passengers to disembark, whereon we stood around on the platform for about half an hour, during which time the main entertainment was people suddenly realising that they really did need to take their bags off and nipping back on to get them while being shouted at by staff. This climaxed with a Eurostar staff member casually carting a large rucksack around, asking if it belonged to anyone (apparently not concerned that it might be a suspicious item).

Eventually, they opened the doors to the upper floor, and we gradually shuffled up, across the Lille concourse past bemused ordinary train travellers to the Eurostar check-in, where we had to show our tickets and go through security and both French and UK passport control again. (Interestingly given we'd been through Belgian and UK passport control in Brussels, so were technically in the UK when on the train, we must have magically travelled from the UK to France when we were allowed off the platform.)

We then entered the Eurostar lounge, where there was a huge pile of cardboard boxes, containing quite a generous set of emergency rations. And there we sat for some considerable time, with the aforementioned fighting rats outside the window (bouncing around amazingly) for entertainment. After a while, the other half of the train also entered the lounge which was therefore both very hot and seriously overcrowded with around 1,400 stoic travellers in it.

After an hour or two (I'm not sure exactly how long, though the train eventually arrived in London 4 1/4 hours late) the doors from the lounge onto the platform opened and we shuffled back onto the train.

In many ways, Eurostar handled this well, but the huge error, which seems so common when travel customer service goes wrong, was the total lack of communication. Once we entered the lounge there were no announcements. No one spoke to us. Even when we went back onto the train, it was just a case of noticing people starting to move - there was no information whatsoever. We never heard how the 'trespasser' got on the train.

The lesser complaint was that the compensation was pretty meagre. I recently had a several hour delay at Paddington (coincidentally also due to to trespassers, though this time on the line) and GWR compensated me by fully refunding my return ticket. Eurostar gave us 50% of the one way fare. And, like many others, we had missed our onward connections, which aren't covered. The worst we heard of was a troupe of child dancers who missed the last train to Liverpool and had to find accommodation in London for the night.

Communication is the absolute lifeblood of good customer service. Eurostar have demonstrated (as airlines also so often do) that failing to communicate does not leave you in a good light. Get your act together, guys.