Review - This is Not a Book about Charles Darwin 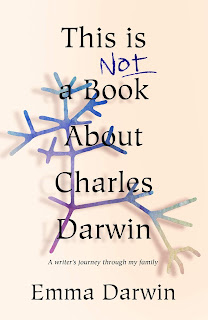 This has to be one of the most unusual books I've ever read. Historical fiction author and creative writing lecturer Emma Darwin takes us on the sometimes painful journey of failing to write a new novel. Along the way we meet many members of the Darwin / Wedgwood / Galton (and co.) clan as Emma (my apologies for using a first name, but to say 'Darwin' in this context would be totally confusing) tries to put together a historical fiction story that incorporates members of her family tree.

The obvious attraction for potential publishers and readers in such a novel is the Darwin name - Emma is great, great granddaughter of the Charles Darwin - however, she quickly dismisses Charles himself as a subject who is far too well known and takes us instead on a trip around a family tree that features a remarkable number of scientists, artists and other notables. In fact, if anything, it might seem that the struggle would be to find individuals who were dull. In reality, though, the difficulty that forms a thread throughout the book is that the well-known individuals (even featuring one of my musical heroes, Ralph Vaughan Williams) are just too familiar and documented, not giving the wiggle-room that a historical fiction writer needs, while the unfamiliar names tend to be rather, well, ordinary, without enough in their lives to carry a story.

As a writer myself, I find Emma's description of her process fascinating. There surely can't be any branch of fiction that requires so much research as historical fiction (though, to be fair, it seems that Emma is particularly conscientious about this - I suspect there are some hist fic authors who are more cavalier) - it feels more like the depth of research required for a non-fiction book. We are taken into the back room, as it were, experiencing the to and fro with Emma's agent (constantly asking where the story is within the writing), and the whole process is illustrated both with snippets of novel-under-development and photographs - mostly period - as photography is another of Emma's passions.

In the end, after several false starts, the central character seems to be likely to be Imogen, a fictional character (I think - I'll explain why 'I think' in a moment) who becomes entangled with the extended Darwin family. After attempts to make the novel work in various periods, this pushes the story forward to focus primarily on the 1930s. The fact that I have to say 'I think' about Imogen being fictional highlights the only real problem with this book. There are so many characters tried out that I totally lost track of who they are (not helped by a family tendency to reuse first names). At one point, Emma's agent complains about how many characters are introduced in a draft of the novel - it's the same for the meta-book.

Despite the degree of confusion arising from this, the reader gets a fascinating insight into a British dynasty in which pretty well everyone will have heard of a few names, combined with an exploration of Emma's writing process and some of the difficulties writers come up with along the way - including honesty about the requirement to keep money coming in somehow. There's a fascinating conflict between the urge to use the family to get the public interest and the desire not to intrude on real people's lives, especially as the time period moves to one where there may still be living relatives. A truly innovative book.

This is Not a Book about Charles Darwin is available from Amazon.co.uk and Amazon.com
book review books fiction historical fiction non-fiction writing