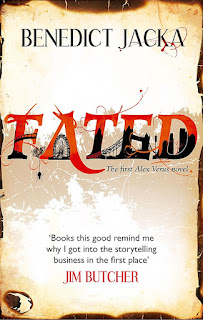 There are broadly two types of urban fantasy. Ones where the setting is primarily the normal world, intruded on by the fantasy - think, for example, of fantasy books where conventional police officers investigate supernatural crimes - and ones where there is a parallel magical society. The latter was the case with the Harry Potter books, and is also what we find in Benedict Jacka's excellent Alex Verus books. This series, beginning with Fated, is now complete with Risen, its twelfth title, which seemed an excellent point to review it.

I was a touch suspicious about this 'new master of magical London' tagline that appears on some of the books - apart from anything, I'm fed up with urban fantasy books set in London. But Jacka gives us something genuinely original. This is a society where the small, magically endowed subset of the population is impressively self-centred. I'd go so far as to say that most of them are psychopaths. But the central character, Alex Verus is different. He is considerate of others and as a mage, in theory a more senior figure in the magical establishment, he tries to help the lesser adepts and apprentices.

Unlike many of the others with magical abilities we come across, Verus has relatively weak abilities, unable to form a shield or attack with some form of force - instead, he is a 'diviner' who can see possible futures, using them to anticipate what others will do.

Jacka manages the difficult balance in a series of this length of giving each book a satisfactory storyline that comes to an end, while maintaining a series arc across the whole thing as we see Verus rise in magical society, discover more about his past and gradually accept his own personality. At the same time, he develops a Scooby gang of weaker individuals (the parallels with Buffy are quite strong in some ways, including the way that the central character transforms) who he nurtures, and one of whom he falls in love with (though we spot this long before he does).

The final book ties things up well with some dramatic twists, especially in the way it plays with first person narrative towards the end. A powerful series that keeps up the pace without the series droop that is common with a run of this length. Recommended (reading the books in order is essential, though).

Fated is available from Bookshop.org, Amazon.co.uk and Amazon.com.