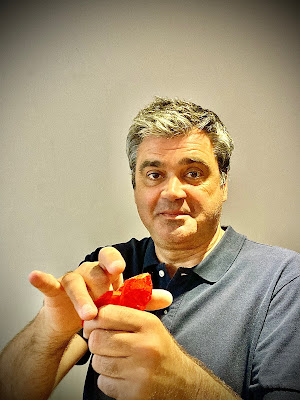 Usually, 'magical thinking' is a reference to fooling yourself into believing something that isn't possible,  but Mark Mason suggests that solving the mystery of how magic tricks work can help you think more effectively.
He's running team building sessions where he performs tricks, then helps those present work together to uncover how the trick was performed. Mark says that he reveals mental techniques that will let you solve pretty well any trick you’ll see in the future - and that these techniques can be applied to problems you’ll encounter at work and in life more generally.

As I know there are a lot of blog posts out there that are really paid adverts, I ought to stress I'm not being paid to publicise this, and I only know Mark as a reader who contacted me previously about my book Inflight Science.

What interested me here was that in the period between working in Operational Research and computing in British Airways and becoming a full time writer, I ran creativity training sessions for large companies. My experience from that time suggests that everyone could benefit from help to think more creatively and can improve their problem solving skills. Mark's approach seemed an original (and fun) way to help participants to think differently - and who doesn't love trying to work out how magic tricks are performed?

I asked Mark a few questions about the approach:

What’s your background? I’ve done lots of things - writing books and journalism, making radio programmes for the BBC, leading guided walks in London, busking on the Tube. A ‘portfolio career’, as it’s called these days.

How did you get interested in magic? I learned some tricks as a child - then rediscovered them when my own son came along. From that I started doing them for his friends, and then his friends’ parents. I realised that I hated the distance magic can put between people ('I know how it’s done, you don’t, nur nur nur nur’) - but I loved leading people towards the secret. It’s a bit like a joke - the trick is the set-up, the secret is the punchline.

Why do you think learning magic tricks works as a team building exercise? In the sessions I do the tricks I don’t tell you how I’m doing them… you have to work out how they're done. With some hints from me, of course. What's wonderful is that the team always achieves more than any individual could on their own. Someone will get 70% of the way to solving a trick, but it takes someone else to chip in with the final 30%. By the end of the session everyone has contributed, and they all feel 10 feet tall.

How can the techniques learned be applied to more general problem solving? A key element is to avoid trying to solve the trick/problem in isolation. Don’t look at the situation now, work out how you got there. Instead of saying ’the coin vanished from your hand’, ask how I picked the coin up in the first place, what I was saying as I did so, when and where you last saw the coin for sure… Instead of saying 'this part of the business isn’t working properly’, ask how it was set up originally, how it developed into its current form, when and where the problems started to occur...

I’m really clumsy - when I’ve tried to do magic tricks I often messed them up - any tips? First pick the right tricks - a lot of the best ones (even those performed by professional magicians) are self-working, and don’t need any difficult sleight of hand or even misdirection. (Obviously I major on these in the sessions, so people can take them away and do them for friends and family.) And even where there is some tricky handling to practise, the key is 'little and often’. I often tell people it’s like getting a new phone - the buttons and icons might be in different places, but because you use them so often you soon get used to the new way you have to hold the phone to adjust the volume/reach a certain app/etc.

What’s next for you? There’s always a new false shuffle to learn...

You can find out more at Mark's website. Here he is in action: