The Man Who Stopped Time 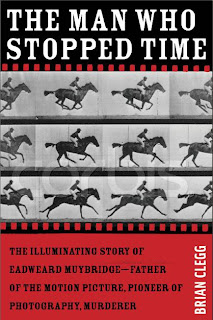 Eadweard Muybridge gets a truly bad deal in the history books. Significantly before the Lumiere brothers were in action, Muybridge was projecting moving pictures. He even built the world's first purpose built cinema for the Chicago World's Fair. Yet he often fails to be given the laurels for his work.

The argument is that his technology was not the same as the one that would eventually be used. 'Real' movies consisted of a string of images on a length of celluloid, each taken through the same lens a few moments after its predecessor. Muybridge's moving pictures were taken using a sequence of still cameras, producing at best a few seconds of movement.

Because of this, although Muybridge's multiple still images like the ones on the book cover are iconic, particularly in the art/design world, his work with projecting moving images has largely been forgotten. So too his fascinating life. This was a man who went from the stuffy Kingston upon Thames of the 1850s to the raw life that was San Francisco in the gold rush. This was a man who murdered his wife's lover, only to be let off by the jury, as they felt it was a reasonable thing to do in the circumstances.

I'm delighted to say that apart from the book I wrote a few years ago on Muybridge, The Man Who Stopped Time, I'm being given the chance to do a talk about him at the British Library in London. If you're in town on 1 February 2010, why not help put Muybridge in his proper place. Here's some details of the talk.

If Muybridge sounds interesting, see my online account of tracking down Muybridge in Kingston upon Thames at the Popular Science website.
biographies movies popular science