February 09, 2010
Although we probably all know the rules, I think it's time I came up with the tablets of stone on letting children decorate their rooms, and the excuses as to why we've ignored them.

#1 Thou shalt not let thy children decorate their rooms

I mean, it sounds a good idea, doesn't it, letting them express themselves, and make their environment the way they want it. Forget it. You want to be able to resell the place some time. And anyway, are you prepared to spend the next six months removing streaks of paint from walls all around the house where they've touched without washing their hands? Because their hands will be covered in paint. This is a rule, even if they only use wallpaper.

#2 Thou shalt not let them choose black paint

I mean, come on. How much of a teenage cliché is it to have black paint in the bedroom? It's so dated. And apart from that, the streaks of paint effect will be even more dramatic. What's more, when they decide to clean their hands afterwards in the same sink as the washing up, you will never, ever get the black paint off the plates.

So what did we do when they suggested painting one wall of the spare room, which they use to hang out in, black? We said 'Yes.' But we do have an excuse. Because they had a genuinely good idea. Not just to paint a wall black, but to paint it with blackboard paint. So there's a wonderful way to let loose artistic urges/aggression etc. Here's the result as it stands at the moment: 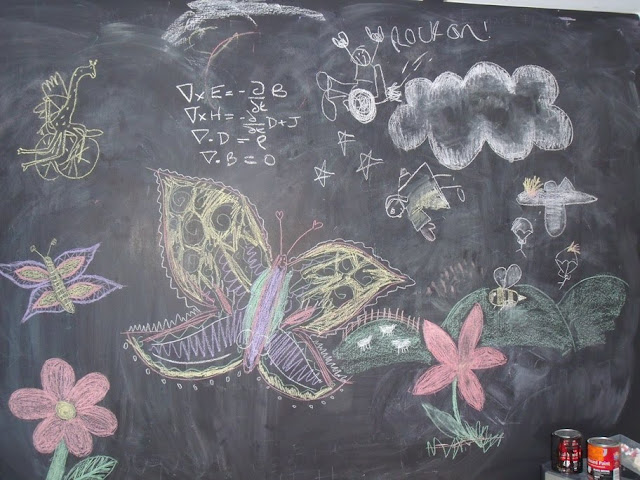 Yes, okay, Maxwell's equations in operator form was my contribution. But why not? That's the joy of it. About once a week we do have to complain about some content and have it removed (usually when there have been boys round), but on the whole it works very well.
art children decorating rules