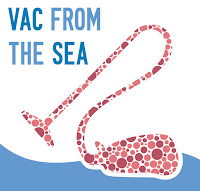 There's a certain brand of journalism that consists of taking a press release from a company, jazzing it up a bit and using it as an article. It happens a lot, because it's very easy to do. I like to think I'm not susceptible to it, but one company that seems uniquely capable of pushing my 'Ooh, that looks interesting' button is Electrolux. It's bizarre when you think about it, because it's not a brand I would associate with innovation - yet they keep coming up with these press campaigns on innovative subjects. We've already had the (totally unfeasible, but joyful) kitchen appliances of 2099 and the 2050 hi-tech cooking surface. Now there's something very much of today - vacuum cleaners made from sea debris.

The idea is simple. According to QI (ahem), the biggest rubbish dump in the world is in the ocean - there is currently a vast amount of plastic debris sloshing about in our seas. Electrolux is planning to harvest plastic from six ocean locations (including the North Sea and the Med) and then to make from this debris 'a limited number of vacuum cleaners.' (Design sketch of how one might look below.) 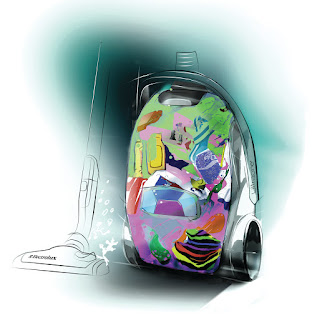 Now in one sense this is purely a publicity stunt. It will be a fairly small scale activity, and certainly not commercially viable. The harvesting of the plastic will use different techniques dependent on location, from 'diving after it to scooping it from the waves.' The chances are such vacuum cleaners will cost a lot more to make than they could be sold for. But the idea isn't to start a new model range, it's to put them 'on display to decision makers and consumers as part of spreading the word.' So it might be a publicity stunt, but it's a potentially valuable one, and one that Electrolux deserves a pat on the back for.

The message is to get more plastic from manufactured goods recycled, and less of it ending up in the oceans. As Celia Nord, Electrolux's extravagently titled Vice President, Floor Care Environmental and Sustainability Affairs puts it 'This issue is much too important to leave to politicians.' Quite right. Clean up, Electrolux.

If you have the strong stomach required to watch corporate videos, here's the Electrolux take on their effort in shiny moving pictures: