A trial and punishment page turner 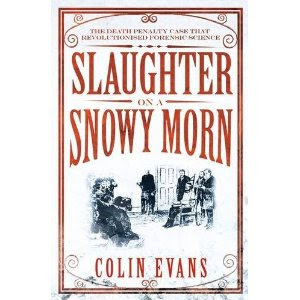 I'm not a great true crime reader. I find an excessive enthusiasm for the details of real crimes rather ghoulish. So when Icon Books sent me a copy of Slaughter on a Snowy Morn, which according to the cover is 'a tale of murder, corruption and the death penalty case that revolutionised the American courtroom' I was a bit hesitant in getting round to reading it. But that hesitation was unnecessary - it's a stunner.

Colin Evans tells the story of a double murder in rural New York state in 1915. Charlie Stielow, a farmhand with little education and less mental acuity is prosecuted for the crime and ends up on death row at Sing Sing prison, heading for the electric chair. But the crime is almost unimportant. It's the legal proceedings that provide an incredible story of one step forward, two steps back that eventually brings Stielow within one hour of execution.

For the first half of the book I read with interest, but as Stielow's increasingly high power team (as New York lawyers come in on what they believe is a terrible miscarriage of justice) face unbelievable setbacks in the face of strong evidence, I literally got to the stage where I couldn't put it down and had to read to the end. Bearing in mind Stielow's date with the electric chair, I hate to say this - but it's electrifying.

There are several themes of interest that come through. One is the dubious expert for hire who totally bungles the examination of the bullets used in the killings, swearing they came from Stielow's gun. Remarkably in his enlarged photos of the bullets he manages to show the opposite side to the side where the scratches that identify them are alleged to be - yet he still sways the jury. One outcome of this case is a direct link to the setting up of the first proper forensic lab for examining bullets. Then there are confessions extracted under pressure by corrupt officials who are so determined to be proved right in the spending of county money that they are prepared to send an innocent man to the chair. And there's the incredibly parochial nature of the grand jury assembled to see whether another man who has confessed to the crime should be tried, and who ignore swathes of evidence, apparently once more under pressure from the local administration.

Stielow himself sits at the centre of all this, mostly ignorant of what is going on while dramatic legal battles and last minute attempts to win a reprieve are fought.

There are a couple of things that aren't perfect. You'd think from the way the author writes about the growing storm of the First World War, which acts as a backdrop to the case, that he believes Germany was in the right and Britain the aggressor. This might have been intended to highlight the negative feelings against Stielow who was German in origin (though this doesn't come out anywhere in the trials), but instead comes across as anti-British. And there's a bit tacked on the end about the founding of the forensic bureau to deal with bullets that is vaguely interesting, but a real anti-climax after the book's main story.

But these are very minor complaints. This is a true crime story for people who don't read true crime stories - because it's not really about the crime at all, it's about justice and the legal system - and a number of individuals fighting to overcome corruption and petty parochial stupidity - which makes for a riveting read.