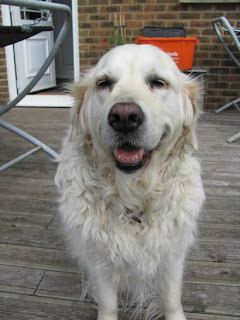 Most people I know are either cat people or dog people. There's the odd exception like the venerable Doctor Gee who seems equally fond of both (though I think he favours Heidi), but most have a preference, often strong.

This view is more than reflected in the animals themselves. Let's face it, dogs don't like cats, and cats don't like dogs. In a big way.

So this gives me a distinct dilemma when I take Goldie for a walk. We are strolling along, Goldie on the lead, and a cat hoves into view. Immediately she tries to run after it, making whining noises. 'That cat,' thinks Goldie, 'should not be here. And it's my business to make sure it isn't for long.'

Now I have two options at this point. I can pull here away with the mildly offensive sounding command 'Leave it!' (Not really anti-cat, it's just the standard 'leave something alone' command.) Or I can give her a bit of free rein, let her chase towards the cat, which runs away and we carry on with the walk.

I have to confess I sometimes do the latter. The way I look at it, it gives Goldie a bit of exercise, it stops her straining at the lead (once the cat has gone she stops pulling), and I never let her get anywhere near the cat. She's only doing what comes naturally.

Oh, and I only do it if the cat looks really smug.

No cats were hurt in the making of this blog post.
animals cats dogs pets