The Booker comes to Yeovil 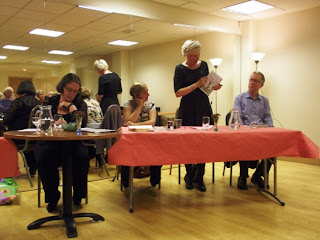 I had a very enjoyable evening on Thursday night down in Yeovil. I've never been to Yeovil before, except when a train stopped a Yeovil Junction - and really only know this Somerset town as the home of Stephen Potter's School of Lifemanship in the whimsical and mocking self-help books Gamesmanship, Lifemanship, One-upmanship etc, which I was rather fond of in my youth.

I was invited along to be on a panel for an event quite unlike anything I've ever taken part in. It was a debate (probably more accurately a discussion) on the Man Booker Prize shortlist organized by the Yeovil Community Arts Association. Each of six panelists had one of the shortlist to read and review, then the topic was thrown open to the audience. The panel was a mix of professional writers (for example cookery writer Tamasin Day-Lewis and me) and local writing enthusiasts.

What was fascinating was the way two books on the list (In a Strange Room and The Finkler Question) were absolutely hated by the panelists, but loved by someone else. We'd hear someone totally demolish a book (Ms Day-Lewis gave the impression she'd rather have a root canal without anaethetic than read In a Strange Room again), then the response would be 'I thought this was wonderful, one of the best books I've read this year...' Highly entertaining.

My own title was the controversial Room by Emma Donoghue, inspired by the Josef Fritzl case. I did find the book interesting, particularly in its study of the worldview of a five-year-old who was spent his entire life in a 12 foot by 12 room - but I wasn't comfortable with the use of something so raw and fresh in the news (and the book had a feeble ending). Though there were minor disagreements on points, this seemed a fair consensus. 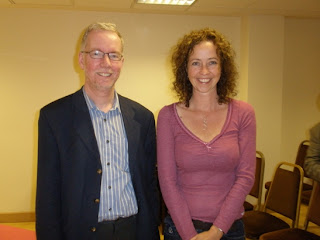 I rather expected to be totally ignored afterwards, as this was a literary do, and, as I pointed out, I write in a genre that is defined by not being fiction. But in fact several people came up to ask about my books (and even bought a few), which was heartening. Really nice people, including a chance to say hello to Kate Kelly whose blog I follow and I've spoken to on the Litopia forum, and a fun evening. If you're ever in Yeovil around this time of year (it's an annual event) - which I know is probably unlikely - give it a try.

Thanks to Kate Kelly for the photos.
fiction literature non-fiction writing