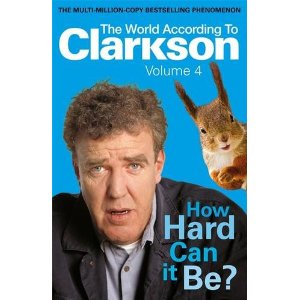 I've always found Jeremy Clarkson very amusing, but rather along 'man you love to hate' lines. However recently I have been saying to myself more and more 'I agree with Jeremy.'

I was kindly bought a copy of his latest musings for Christmas and have been reading these, all too often thinking 'Hmm, he's got a point.'

Not only do I seem to have almost identical tastes in popular beat combos (mostly of the prog rock variety), we share a sole superstition. Or to be precise we are both not superstitious, but both greet single magpies (he salutes them, I say 'Good morning/good afternoon.') I really don't know why I started - I think it's because I'm fond of the magpie augury - but once you have, as JC (as I like to call him) points out, it's very hard to stop. There's no point saying 'Surely a rational person like you doesn't believe in this rubbish.' I refer you to the great physicist Niels Bohr. When asked why he had a lucky horseshoe in his office, and 'surely he couldn't believe in this rubbish' he commented something along the lines of: 'Of course I don't believe in it. But I'm told you don't have to believe in it for it to work.'

Perhaps most surprisingly, I found myself agreeing with JC about environmental issues. When I say 'agree' I need to qualify this. I don't go along with a lot of the detail. I find patio heaters execrable, for instance. But I do agree that it is totally idiotic that people seem to think the subject is entirely black and white. So many pro- and anti- environmentalists believe that either you have to agree with every loony green scheme or think that everything that claims to 'help' the environment is a communist conspiracy. It's not like that. As JC points out, some green ideas are good (recycling and reusing, for example), while some are total rubbish (the opposition to nuclear power, for instance).

The fact is some green enthusiasts hold some pretty wacky ideas. If you doubt this, try reading the Ecologist magazine. There are perfectly sensible green ideas that will help reduce climate change or improve the environment, rubbing shoulders with articles about people who claim to be 'sensitive' to WiFi or pieces on how we ought to take healing by shamans seriously. Being green doesn't mean you have to be a hippy or throw rationality out of the window.

So there you have it. It appears I am becoming Jeremy Clarkson (thankfully without his hairstyle). And on that bombshell, it's time to sign off.