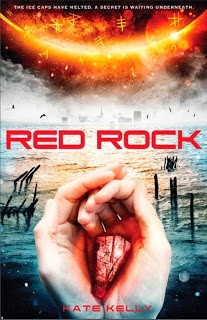 If I am honest, I'm not a great fan of books with a disaster, 'end of civilisation as we know it' scenario. In my teens I hoovered up vast quantities of these from War of the Worlds to Day of the Triffids, and absolutely loved them in my typical teen enjoyment of misery, but as I've grown older I have become increasingly fond of it all ending happily ever after. I think my problem with disaster books (and films) is the cavalier way that millions are slaughtered by the author. We are expected to feel connected to the main character, who usually miraculously survived, but I am always kept at a cold distance, because I am so sad for everyone else, the bit part players who are killed off for the sake of the scenario.

This meant I was a little nervous coming to Kate Kelly's young adult novel Red Rock, as this is 'cli fi' - fiction based on the world being transformed by climate change, and on the whole that's a pretty disaster-laden scenario. I needn't have worried - although the backdrop is of civilisation crumbling in the face of climate change, the storyline is pure action thriller with plenty of mystery and suspense, which soon distracted me from any concern about the fate of the world.

The main character, Danni, is beset by a host of problems, left on her own (or at least with a stranger) in an attempt to escape capture and understand more about the mysterious object (not unlike the one in the hands on the cover) given to her by her dying aunt. The tension rarely gives up for long - this is one of those excellent stories where the reader accompanies the MC on a race against time and the odds.

If I have any complaint it's an unusual one for me - there is not quite enough description. I felt this particularly when Danni visits both Oxford and Cambridge, cities I am very familiar with, yet I was never given enough to know where she was. Particularly irritating was the way she has find the library of a Cambridge college, but we aren't told which. But any frustration from this is washed away as the action pounds on.

Particularly good for a young adult novel is the way that there is a 'bad' character who turns out to not be all bad. For those familiar with that epic of Australian art, Neighbours (what can I say? my children made me watch it), I've always been rather impressed by the character Paul Robinson, who despite being a long-running baddy is at the same time very caring for those who are close to him, and has moments of genuine thoughtfulness to season the self-centred, grasping ruthlessness. Similarly, Red Rock has a character (I won't give it away by saying who) who betrays a friend but then more than makes up for it.

The other surprise was that I rather liked the climate change backdrop. It is never heavily laid on, but both the sad remains of Cambridge, under water when the tide is in, and the casual decay of coastal towns is beautifully handled. It is never trowelled on, but really gives a feel for the depressing reality of a future where climate change is unchecked.

Overall a book that works both as a good, page-turning thriller and one that makes you think.