Getting in a twist about time travel 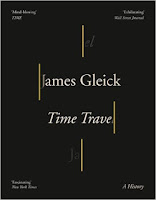 I've read a couple of things lately about time travel that just don't make any sense to me. Specifically, both said that it wasn't possible to travel into the future. One was Time Travel by James Gleick, which commented that what special relativity offers is 'just time dilation' not real travel at all, the other being Richard Muller's The Physics of Time, which I am yet to read, but according to this article suggests that you can't travel into the future as it doesn't exist 'yet.' Both of these appear to entirely miss the point.

Unlike the TARDIS in Dr Who, real time machines find travel forward in time much easier than backwards, which may be theoretically possible but is practically implausible. And the approach taken to reach the future is totally different from a time machine that disappears from 'now' and reappears at another time - but it is ridiculous sophistry to suggest that a time machine based on the special theory of relativity doesn't allow us to travel into the future. There is well established science, demonstrated in many experiments: it's possible to travel as far as you like into the future - you just have to set off in a spaceship and come back to Earth. When you arrive, you will have moved into the future. The faster you go, the further you will travel into the future.

If you move fast enough, you could end up hundreds of years into the future. Everyone you knew - including a twin if you have one - will be dead. The date will be the future date you reach. Of course, it's not an instantaneous leap into the future - but who says time travel has to be instantaneous? No other form of travel is.

The fun thing about all this is that the mathematics to work out just how far you travel into the future requires nothing more than GCSE maths - in fact, in my new book The Reality Frame I even show how to calculate it (though I admit I put it in an appendix for those who are averse to a few equations). There is no doubt about this - this is real time travel into the future, and those who say it's impossible make science seem far less interesting than it really is.
physics sophistry time time travel