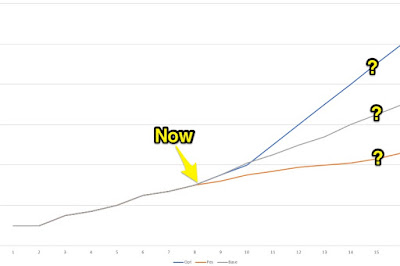 I regularly write about the fun to be found in probability and statistics - but also the difficulties we face in understanding them, because our brains don't seem to be wired in a way that adequately deals with this kind of mathematics. However, there's one misunderstanding that stands out heads and shoulders above the rest - and this is that we find it very difficult to distinguish between forecasts and facts.

Data about past events can be (though isn't necessarily) accurate. Data about the future is often only accurate if you are lucky. I'm not saying all forecasting is worthless - it's the best of a set of bad options (certainly better than relying on Mystic Meg) - but we always need to be aware of its limitations.

Let's take a simple personal example. My mortgage will soon be coming off a fixed rate, and the bank has kindly offered me a series of options for new fixed-rate details. To be able to decide between them, whether consciously or not, I have to do some forecasting. The choice came down to a two-year deal, fixed at a rate slightly better than I have at the moment, or a five-year deal fixed at a rate that is slightly worse than my current one. With my forecasting head on, I suspect that interest rates will rise significantly over a five-year period - and so I opted for the five-year deal. However, let's be clear about what I just did: I took a bet on what interest rates will do over the next five years. This is gambling just as much as taking a punt on a horse running in the 3pm at Doncaster. The probabilities may be different - but I don't know what's going to happen. All I can do is guess, based on the data I have, and place my bet.

This educated guessing applies just as much to the majority of decisions I may make about the future (financial or otherwise) - or, for that matter, to leaked Cabinet Office forecasts of the impact of Brexit or to a company's budget. The forecast isn't a fact, and when we make a decision based on it, we are taking a (hopefully calculated) gamble.

Let's finish of with that business favourite, comparing forecasts with actuals. I have witnessed many times anguished post-mortems where companies attempt to explain why what actually happened has differed from the budget or sales forecast, or whatever the prediction happens to be. They look for changes in the market, or the environment or their staffing... but what they hardly ever do is say 'Yep, the forecast was wrong, wasn't it?' Admittedly, incorrect forecasts aren't always the reason for a deviation. It can be due to those external factors. But I suspect poor forecasting is to blame in many of the cases where an organisation spends many person-hours trying to unpick what went wrong operationally.

I'm not suggesting you should shoot the messenger, or, in this case, the forecaster. Because we are dealing in probabilities and, yes, guesses, they will go wrong. Equally the forecaster may have biasses themselves - because there are usually a huge amount of assumptions in making a forecast. Rather, when we hear a forecast, it's essential to get a better idea of the probabilities involved (if known), the accuracy of the data and, crucially, the assumptions that are being made. Only then can we make sensible use of a statistical crystal ball. If that information isn't available, don't give the forecast the time of day.