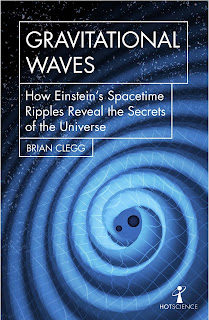 My latest book in the Icon Hot Science series is Gravitational Waves. All too often, this remarkable phenomenon get labelled in the media as if 'proving Einstein right' was its main role. There are two problems with this. In some ways gravitational waves prove Einstein wrong (he said they were so weak, they would never be detected)... and they're far more important than that.

To give a flavour of why, here's the opening of Gravitational Waves:

There are times when those working on a major science project receive public accolades. Typically, it’s when the data from a live science run is released, and what has been an intense period of private work becomes public property, to be dissected by the researchers’ scientific peers and celebrated by the world’s press. But on 14 September 2015, the huge team working on LIGO – more formally, the Laser Interferometer Gravitational Wave Observatory – had no such expectations. No one realised that 50 years of fruitless work was about to be rewarded in an unexpected fashion.

The immense LIGO experiment, covering two sprawling sites in the US and supported by over 1,000 scientists working around the world, was undergoing an engineering run. This was routine technical testing before the gravitational wave observatory would go live a few days later. It was the eighth and  final cycle of fine-tuning before things might get interesting. Yet around 7.00am Eastern Standard Time – midday in the UK – a  first email was sent out to interested parties that signalled the beginning of the biggest change to astronomy since the introduction of telescopes.
On that day, our understanding of the universe took a leap forward.

For over 50 years, scientists had been looking for the tiny distortions in space and time caused by a distant cosmic event that would add a new, powerful approach to the astronomer’s armoury. They had never achieved a single result. Some even suggested that gravitational waves would be impossible to detect unless we could take the leap of building an observatory in space, as the tiniest local tremor was enough to confuse the incredibly delicate instruments. But for now, these worries were put to one side. No careers were at risk of yet another failed detection of these elusive waves on this run. It was simply a matter of ensuring that the technology behaved as it should.

However, just because this was an engineering run did not mean that the observatory was inactive. Unlike the dome of a traditional telescope, with shutters to prevent light coming in, there is nothing that can stop gravity getting through. Gravitational waves may be incredibly weak and difficult to detect, but nothing can hinder their progress across the universe. And the 14 September email told the members of the LIGO collaboration that an unexpected event had occurred.

Over the next two days, excitement grew. The event seemed more and more likely not only to be a real one, but also to provide a very significant discovery. No one had expected gravitational waves to be obvious in the data stream, but these were clear, visible signals – so strong that, were this a real detection, they had both found gravitational waves and made the first-ever direct observation of black holes. In which case, the team was surely looking at a Nobel Prize. More than that, their work – which some still believed was pointless, because they thought that LIGO wasn’t sensitive enough – would have been the first step into accessing the mysteries of the universe in a way that had never been possible before. They were genuinely at the frontier of science. Yet it would be many months before the details could be made public. Months during which the teams had to lie to colleagues and repeatedly try to quash the rumours that began to fly around the scientific community. The countdown to gravitational wave astronomy had begun.

Read more in the book...