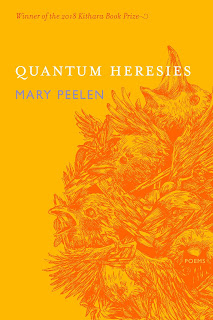 There's quite an industry these days in art/science crossovers, which can often be seen from one of two directions - as trying to make science more accessible or trying to make art more relevant in a scientific world. Mary Peelen's collection of poetry is not really trying to do either of these things - and as a result does a much better job than any of the other, often over-earnest, attempts I've seen.

The title might suggest that quantum physics is a linking theme, but though physics is perhaps involved more than the other sciences, even within physics Peelen brings in a wide range from thermodynamics to string theory, while her poems often also are entangled with mathematics (who can resist a poem titled dx?), chemistry and medicine.

Most of the poems are spare, frequently only taking up a single page and consisting of ten non-rhyming couplets. I liked the approach - it felt like it was giving me thinking space to absorb the words.

Despite titles such as Supernova, Chaos Theory, Redshift and Properties of Light, the poems don't attempt to explore the science per se, but rather make use of aspects and metaphors of science and maths as a way to help the reader relate better to the world around them and the human condition. It's hard to write that without making the whole exercise sound pretentious - but it really isn't, and it works wonderfully.

The only thing that would make it better for me would be to add a page of brief exploration of the science being used in this way after each poem, as I think it would help the non-scientific reader better understand why Peelen is using this particular science or maths concept - and perhaps genuinely add a touch of science accessibility.

If I'm honest, I've never been a great fan of reading poetry, other than the simply entertaining kind. But I think that Peelen has achieved something I've never seen before - poetry that makes you think both about being human and about science, and poetry where having an understanding of science actually adds to the enjoyment of reading the poems. Infamously, Keats in Lamia moaned that 'charms fly / at the mere touch of cold philosophy' and effectively told Newton off for 'unweaving the rainbow'. But in Quantum Heresies the natural philosophy adds charms.

This is a book of poems I will come back to again and again.

Quantum Heresies is available from the publisher Glass Lyre Press, or from Amazon.co.uk and Amazon.com.
Using these links earns us commission at no cost to you

November 02, 2015
The Internet has gone mildly bonkers over a child in America who was marked down in a test because when asked to work out 5x3 by repeated addition he/she used 5+5+5 instead of 3+3+3+3+3. Those who support the teacher say that 5x3 means 'five lots of 3' where the complainants say that 'times' is commutative (reversible) so the distinction is meaningless as 5x3 and 3x5 are indistinguishable. It's certainly true that not all mathematical operations are commutative. I think we are all comfortable that 5-3 is not the same as 3-5.  However. This not true of multiplication (of numbers). And so if there is to be any distinction, it has to be in the use of English to interpret the 'x' sign. Unfortunately, even here there is no logical way of coming up with a definitive answer. I suspect most primary school teachers would expands 'times' as 'lots of' as mentioned above. So we get 5 x 3 as '5 lots of 3'. Unfortunately that only wor
22 comments
Read more