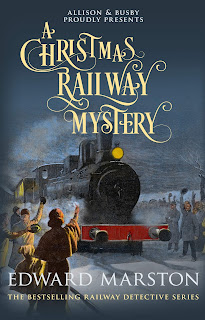 Each year I attempt to find at least one Christmas murder mystery - after all, what would Christmas be without a good murder?

I thought I had hit the jackpot with A Christmas Railway Mystery - not only a Victorian Christmas setting, but the location of the murder was the Great Western Railway village in my home town of Swindon. And there is no doubt that the book had its enjoyable elements, but it also had some severe limitations.

Perhaps the best bit was the evocation of the Railway Village, built by the GWR adjacent to the railway works where it built its rolling stock, reflecting the mix of benevolence and patronising control that seemed to accompany some of the better Victorian employers. Edward Marston evokes the detail of the village and its life well, apart from the oddity of describing the (still existing) buildings as red brick - they aren’t.

Marston also gives a satisfying mix of strands, with the main murder investigation in Swindon set alongside developments in the detective Inspector Colbeck’s home life and a parallel investigation into the disappearance of Colbeck’s grumpy boss, Superintendent Tallis in Canterbury, poorly investigated by Colbeck’s scheming rival, Inspector Grosvenor. And it all trundles along quite well. But the characters are rather wooden, the dialogue isn’t great and there is little heed paid to ‘show, don’t tell.’ This extends to some magnificent overkill description. For example, when we first come across the railway village church, a relatively minor setting, we are told: ‘constructed of limestone, it was roofed in tile and lead and surmounted by a crocketted spire... The church had a capacious  interior, comprising a five-bay nave with a clerestory, a north aisle and a south aisle with a three-bay chapel and a three-bay chancel.’ Pevsner would have been proud - but it hardly moves the action forward in a murder mystery.

Colbeck is apparently an excellent detective, though he seems to work entirely on collecting circumstantial evidence, then pretty much randomly accusing possible suspects from those who the evidence fits.
It’s a pleasant enough read, but don’t expect either the period ingenuity of a Sherlock Holmes tale or the depth of a modern murder mystery. With that proviso it’s an acceptable addition to the Christmas murder collection, but I don’t think I will be revisiting the railway detective series.