How dodgy statistics can ruin a perfectly good message about recycling 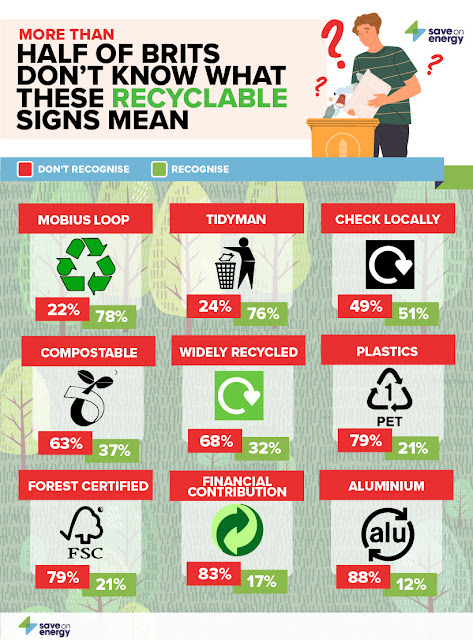 I got a press release the other day which put across a sensible message that people often don't understand what recycling symbols on packaging mean. The sponsors of the survey SaveOnEnergy asked 2,300 people the meaning of various recycling symbols - the infographic shows their results. The percentages are interesting, though not really surprising, apart perhaps from 88% not able to understand the aluminium one. (I certainly had no clue about the financial contribution one.)

So far, so good. But the headline of the press release blares Brits Are Spending 54 Hours A YEAR Trying to Recycle. What? Where did that number come from? We are also told that 'Brits can spend up to 14.2 hours a year searching for a recycling symbol and its meaning, before deciding to give up'. Really?

The press release gives the following methodology (and full marks to them for telling us what it was - many don't):

2.      SaveOnEnergy then timed a number of participants to find out how long it would take them to: look for the symbol and Google what the symbol meant, before giving up (average of 41 seconds) and looking for the symbol, Google what it means and keep searching until they found the correct method of recycling (average of 2 minutes, 37 seconds).

3.      SaveOnEnergy then used this to work out how much time was spent looking per item, per ‘big shop’.

I did have to clarify the second point - how they got stats for both giving up and continuing. It turns out just 100 of the 2,300 participants were timed and were asked 'to let us know how long they spend looking up symbols and if they were to give up (because it took too long) then to be honest and let us know - out of those (38) who did look and give up, it averaged at around 41 seconds, for those (62) who kept looking until they found the right instruction (checking local council website…etc), it took on average 2 minutes and 37 seconds.'

Okay. But there's one huge flaw here. Remember Brits Are Spending 54 Hours A YEAR Trying to Recycle - not a single person said they do this. And even if they did try to look up the symbols, who would do it for every item in their shop every time? Personally, I just follow my local authority guidance - I don't pay attention to the symbols at all, and I've never looked one up. Even if I did, say, look up four or five of them, we're talking ten minutes, not 54 hours.

So, yes, there's a sensible message here. Many of those symbols are pointless. Maybe we could come up with a more intuitive set. But for goodness sake, people, please don't use horribly distorted statistics to try to make the point. (Oh, and I'd rather not be called a 'Brit' - but that may be just me.)