Can we learn from cautionary tales? 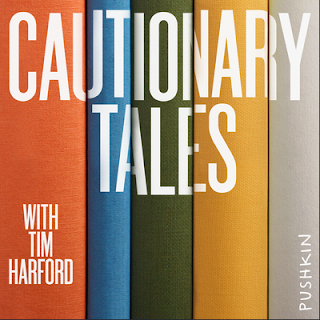 I'm a big fan of Tim Harford's Cautionary Tales podcasts. In them, the economist and presenter of the BBC's excellent Radio 4 show More or Less relates examples of where human error and misunderstanding has resulted in disaster (or, occasionally, triumph). I also love those pop psychology books such as Dan Ariely's Predictably Irrational which tell us about all the ways we make bad decisions and suffer from biases, This is perhaps in part because I made a bad decision myself in my first year at university, when I wanted to take psychology as my fourth subject in Natural Sciences and instead allowed my tutor (a crystals scientist) to persuade me to do crystalline state instead, which I hated.

On this morning's walk, I was listening to one of Tim's podcasts from June 2020 (I came to the series relatively late and am catching up on earlier episodes). In it, he admits that he himself did not step back and think about the implications when he first found out about the pandemic and, as a result, assumed, for example, that he would have money coming in from gigs over the summer. He compares this with other, more disastrous occasions when people did not change from their planned activity, despite evidence that they needed to (for example, in the remarkable case of the tanker Torrey Canyon, which he covered in his very first podcast).

What lesson did I learn from this cautionary tale? If Tim Harford, someone who spends his working life thinking about this kind of thing, did not change his behaviour in the face of one of the common errors and biases he describes, is it likely any of us will? Is there actally any point to this kind of information? I confess, I quickly forget most of the specific cognitive biases within days of reading about them (in part because there seem to be so many).

I think the answer is that these tales and books are valuable - but not in the life changing way they tend to be presented. They're partly worthwhile because they are very engaging. They tell us about the human condition and why we make so many mistakes. And hopefully, even if we all, Tim included, fail sometimes to learn the lessons, there are a few underlying motifs that those of us who are fans are likely to pick up on at least some of the time:

I suspect this kind of broad guidance is all the practical benefit we get from these tales and books. But just as is the case with diets and health, there isn't enough to make a book out of the valuable stuff. The health thing is basically eat a varied diet with plenty of vegetables and a reasonable amount of fruit and not too much fat and sugar while taking regular exercise. Doesn't make much of a book. Similarly here, the 'think before you act' type advice is the only important lesson you can hope to benefit from and the rest is window dressing. I'm not going to stop listening to these podcasts and reading these books: I very much enjoy them. But I realise that they aren't going to change my life much, once I've got those basics embedded in my brain.