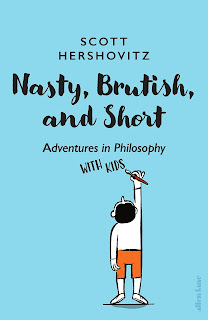 Scott Hershovitz is a little harsh in applying Hobbes’ aphorism calling human life ‘nasty, brutish and short’  to children, but his idea of using children’s musings as a starting point for exploring some of the big philosophical ideas with an adult audience is little short of genius.

Hershovitz points out that until about the age of nine, children are naturally philosophically minded, as demonstrated by their perpetual asking of the question ‘Why?’ Science communicators find a similar effect with science - pretty well all children are fascinated by science until they are 11 or 12 (I’m sure there’s a research paper in there for why one interest dies before the other). Not only does Hershovitz encourage this exercise in thinking by turning the questions back on his children, but he also stimulates readers to think about these issues themselves. As he points out, you might not always agree with him (I certainly didn’t), but it’s a valuable exercise to think through these big ideas – and your personal prejudices – to discover more about reality and yourself.

Hershovitz’s speciality is philosophy of law (I didn’t even realise this was a thing, though when you think about the nature of law and justice, it’s an obvious topic), and law-like questions are well covered, from rights and revenge to punishment and authority. I was a bit disappointed when he talked about rights that, although he acknowledged that rights are twinned with responsibilities, he didn’t explore the idea that it’s better to think in terms of those responsibilities (which are outward looking) rather than rights, which are inward looking.

It’s almost inevitable that practically every reader will find some of Hershovitz’s views questionable. While I, for example, had little problem with his approach to swearing, others might be unhappy to find their children as foul-mouthed as Hershovitz’s are. Similarly, while Hershovitz’s ideas on God may be pretty much the norm in Europe, I would imagine a lot of Americans would struggle with them. (It may be to keep things simple, but I found his attitude to the Bible, say, was strangely flawed, in that he seemed to either assume the Bible had to be the truth in describing, say, the vengeful God of the Old Testament, or the whole thing was imaginary, rather than allowing for a circumstance where parts of this complex collection of ancient books could be folk tales while other parts could be more significant.)

I’ve leapt ahead a bit there in getting on to religion. Hershovitz gives us sections on ‘making sense of ourselves’, including gender and sports, race and responsibility , and on ‘making sense of the world’ which includes big topics such as knowledge, truth and the mind as well as the fun subject of infinity, which ties in well to both science (for example, the size of the universe) and maths. While I wouldn’t go as far as Hershovitz in suggesting science and maths are sub-disciplines of philosophy, I far prefer his approach to that of some well-known scientists who pompously and entirely inaccurately have declared that philosophy is no longer required as science has made it redundant. Inevitably, we also encounter the now very familiar trolley problem: though we get some of the less visited twists on the concept, I’ve seen this handled better. Hershovitz doesn’t really deal with the impossibility of being totally detached from real world concerns, such as the unlikeliness that pushing someone off a bridge could be guaranteed to stop a runaway tram.

Hershovitz is generally very good at pulling apart our assumptions, but his own US-centric cultural prejudices shine through particularly on gender and race, where he seems incapable of questioning the typical academic left wing liberal view. (This is particularly noticeable in his coverage of trans-athletes where the reality of sport has already changed significantly since the book was written). Interestingly, this is a point he makes himself later when talking about the echo chambers of both right and left wing figures, but seems to miss his own prejudices. For example,  most academics fail to recognise their hypocrisy in recognising the importance of reducing climate change but still fly all over the world to conferences. If we are going to be picky, it’s also amusing that he applies the ‘invisible Gardener’ logic to God, but not to the equally applicable topic of the simulation hypothesis.

Overall, this book employs a brilliant concept, though I wish he hadn’t used his own kids as the only examples of children and philosophy, as it can read like the boasting of one of those parents who bores you rigid by telling you all the clever things his precocious children have said. Even so, it's a great way to bring philosophy, a topic all of us should know more about, to a wider audience.

Nasty, Brutish and Short is available from Bookshop.org, Amazon.co.uk and Amazon.com