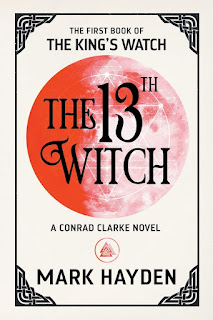 Of all the flavours of fantasy novels, I only really enjoy those set in the real world (often described as urban fantasy, although some, as is the case here, are mostly rural) - whether it's the intricate cleverness of something like Gene Wolfe's Castleview, or when it's mixed with the police procedural, as in Ben Aaronovich's Rivers of London, Sarah Painter's Crow Investigations or Paul Cornell's Shadow Police. That meant I was delighted to discover Mark Hayden's King's Watch series. In many ways it's great, though it has proved to be something of a curate's egg.
The good news is that Hayden does some things brilliantly. I love the idea of rather than a police tie-in, it's a quasi-military one linked to the Tower of London, with a group originally set up by King James I (the aforementioned King's Watch, headed by a Peculier Constable). Hayden's magickal (sic) world and its political complications are beautifully imagined - whether it's the interplay between various human factions (for obscure historical reasons, for example, the North West doesn't recognise the authority of the King's Watch), or a very rich mix of different races from the near-human to demi-gods. Hayden is also very good at the action scenes - they really carry the reader along with page-turning vigour.
In The 13th Witch, the central character Conrad Clarke, a former RAF helicopter pilot, is introduced to a hidden magickal reality. At the time of writing there are 10 books in the series, with presumably 13 in total as each title reduces the number by one. There's an element of humour that's quite strong in the first book, though this tends to disappear as you move through the series.
So far, so good. But there are a couple of issues. The smallest one is that sometimes the situation Hayden imagines gets a bit beyond his ability to describe it, particularly in later parts of the series where he describes shifting between different planes of reality, some of which involved distorted flow of time. (Never as confusing as the movie Tenet, though.) There is also rather too much domestic background - we spend a lot of time on Clarke's relationships (and cricket playing) that really doesn't take the plot anywhere. Apart from his irritating fiancé, he has a series of attractive female work companions, who all seem to be about half his age, which is a bit creepy. But the thing that really irritated me was the way that you get the literary equivalent of in-app purchases.
As is not uncommon with big series, there are some spin-off novellas. I have no problem with these to optionally fill in back story or generally go off on a tangent, provided the main line of novels doesn't refer to them. The issue hear is that Hayden will mention something significant to the plot... then say 'which you can read about in Novella X, so we won't talk about it here' (or words to that effect). I found that so infuriating that a couple of times I nearly gave up on the series part way through a book. Each time (so far) I felt like that, I was then roped back in by a clever bit of suspense and intrigue. But I really didn't like this approach.
If these are your kind of books, I heartily recommend giving them a try - but they do come with that warning.

The 13th Witch is available from Amazon.co.uk, Amazon.com and Bookshop.org.