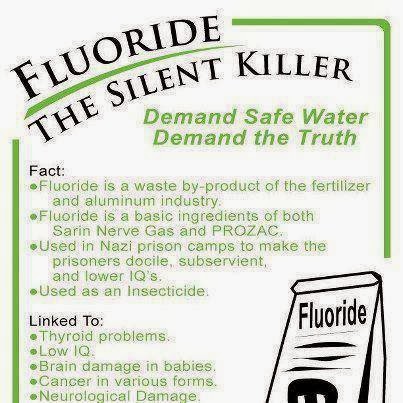 There is a long standing campaign in the US to stop fluoridation of drinking water, due to concerns about the dangers of sodium fluoride. (Most of the UK doesn't do this, though around 10 per cent of us get fluoridated water, and most of our toothpastes contain sodium fluoride.)

I have no particular axe to grind on this, though I would be rather surprised if there is a significant health risk with this particular salt - NHS England says 'Reviews of the risks have found no evidence to support these concerns and the general consensus is that water containing the correct amount of fluoride and fluoride toothpaste have a significant benefit in reducing tooth decay.'

What I do object to, though, is when people use scaremongering tactics - specifically making statements that are irrelevant or unsubstantiated.

The other day, as you do, I got one of those graphics sent to me on Facebook, which I have attached here. And it's hard to imagine a better example of naughtiness in misleading statements. Let's take those facts:


So there you have it. I have no objection to proper arguments being put forward against fluoridation, but using 'facts' of this kind is not the way to go about it.

Thanks to Anthony Morris for providing a link to this review - it doesn't in any way make the misleading and untrue statements in the graphic okay, but it appears to be interesting evidence in terms of impact on one of the 'linked to's - children's IQ.

I would point out, though, that this is for high levels of fluoridation (specifically it provides 'Sensitivity analyses of pooled random-effects standardized weighted mean difference (SMD) estimates of child’s intelligence score with high exposure of fluoride.') And my other concern with it is that I couldn't find any absolute figures for the reported IQs, only a weighted mean difference of -0.45, which is pretty negligable unless I misunderstand it.
drinking water facts fiction fluoridation propaganda