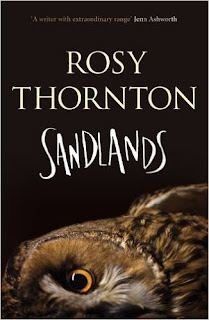 Traditional holiday reading involves the huge, wrist-bending saga, but my favourite books to take away on a break are collections of short stories. There's something about the ephemeral nature of short stories that fits perfectly with that strangely detached-from-reality feeling of being on holiday. This year I'm opting for three very different collections: The Collected Stories of Grace Paley, Rogues - a mostly fantasy collection edited by George R. R. Martin and Gardner Dozois - and, first, Sandlands by Cambridge academic and novelist Rosy Thornton.

It's a bit of generalisation, but I'd say short stories fall into two broad categories - there are mood pieces, which don't necessarily have much of a story, but give the feel of a place or time or person, and there are twist-in-the-tail pieces, where we think we know what's happening, but at some point, often near the end, we find that things are very different from expectation. Many of Rosy Thornton's stories in Sandlands are an interesting hybrid, where a lot is about a sense of place (that place mostly being Suffolk, near Aldborough), but the twist in the tail becomes more of a connection in the tail, where something occurring in that distinctive landscape suddenly and intimately ties into an aspect of the protagonist's life.

This is distinctly reminiscent of the importance of location in the work of one of my favourite authors, Alan Garner. Garner's mostly Cheshire landscapes influence and inhabit his characters, and there is no doubt that Thornton also brings the East Anglian countryside and its inhabitants in that particular corner of Suffolk - both human or animal - into the storytelling to have a powerful effect on the protagonists' lives. As the cover suggests, one of those animals is a barn owl, whose ghostly presence acts as a kind of mute guardian - but there is also a white deer, an injured fox and many more to add to the collection. Another frequent theme running through the stories is death, though not in a morbid sense, more as another of the everyday fixtures of life close to the land.

It's difficult to review individual stories, because to describe them in any detail can give too much away. However it doesn't do any harm to pick out some little points - I was particularly impressed with the link in the tail of the story featuring the fox, which also brings in the sogginess of an East Anglian landscape feeling the brunt of climate change (not to mention the impact of sea level rise). And the story involving the owl, again like the best of Alan Garner, has a poignancy that spans time as well being imbued with the sense of place. The variety was excellent, whether it was an electronic ghost story for the twenty-first century or a sadly rare story that brings in one of my favourite places, Cambridge, where the stark University Library plays its part (though the Suffolk coast is still more important).

Just occasionally the link in the tail was slightly predictable - although I loved the almost tangible atmosphere of a story mostly set in a church tower ringing chamber, I saw the ending coming a mile away. There was also a story where an academic stood in for vicar on maternity leave, where the concept was wonderful, but the overall feel was let down by inaccurate details of village church life - rather than a single stand-in, key to the story, such gaps are in practice dealt with using a hotchpotch of cover from local clergy - and the idea that a village PCC would be able to offer funds to regularly subsidise events the way this one does just doesn't ring true.

These, however, were small isolated points that only surface for the very picky reader in an otherwise delightful landscape of story. And, of course, one of the joys of a short story collection is that even if one story isn't quite your cup of tea (I should emphasise I enjoyed even those two), another one will be along soon with a totally different protagonist and storyline.

All in all a wonderful collection that will play with your emotions, deliver over and over, and often make you pause at the end of the story to savour its impact.

Sandlands is available from amazon.co.uk now and amazon.com.
Using these links earns us commission at no cost to you
East Anglia fiction review reviews short stories